To introduce its potential, strengths, incentive mechanisms and policies, as well as important investment attraction projects and create a forum for domestic and international institutions, investors and enterprises to meet, talk, exchange experience and expand cooperation for joint development, the Phu Tho Provincial People’s Committee will coordinate with the Ministry of Planning and Investment, the State Bank of Vietnam (SBV) and relevant central agencies to organise the Phu Tho Investment Promotion Conference 2015 in Dao Ngoc Xanh Resort, Thanh Thuy District, Phu Tho Province on December 11, 2015. On this occasion, Vietnam Business Forum Magazine has an interview with Mr Bui Minh Chau, Chairman of Phu Tho Provincial People’s Committee. Ngo Khuyen reports.


Phu Tho, known as the Ancestral Land of Vietnam - the source of Vietnamese people, is endowed with favourable conditions for socioeconomic development. Could you please elaborate on those favourable conditions?
As known, Phu Tho is the source of Vietnamese people where the first official state was founded over 4,000 years ago. Viet Tri was the capital of Van Lang State and a long-time economic, political and social centre. These show the favourable position, influence and ripple effects of Viet Tri City in particular and Phu Tho Province in general, in comparison with many other localities in the northern region.


Today, Phu Tho province, located in the centre of the northern midland and mountainous region, is the intersection of the Northeast, the Red River Delta and the Northwest. Situated on the three-river intersection and the western gateway to Hanoi - the current capital of Vietnam, Phu Tho Province is just 80 km from Hanoi, 50 km from Noi Bai International Airport, 200 km from Lao Cai and Thanh Thuy Border Gates, 170 km from Hai Phong Port, and 200 km from Cai Lan Port. Thus, Phu Tho province can be seen as the connecting bridge of Western Northeast provinces with the nation and the world.


Phu Tho has a relatively convenient transport system, which comprises the Hai Phong - Hanoi - Lao Cai Railway, now being expanded into an international transport route, and waterway transport routes along the Red, Lo and Da rivers. The province has National Road 2 linking to Tuyen Quang and Ha Giang provinces and to Yunnan Province of China; National Road 70 connecting to Yen Bai and Lao Cai provinces of Vietnam and Yunnan Province of China; National Road 32 linking to Yen Bai and Son La provinces, and many roads that lead to other provinces in the country and the world. Especially, the operation of Hanoi - Phu Tho - Lao Cai Expressway in 2014 has opened up a new gate for integration as it links Phu Tho province with Hanoi - Haiphong - Kunming International Economic Corridor.


Phu Tho is also rich in mineral resources, with many materials measured to be exploited on an industrial scale, such as rock for cement production, iron, kaolin, feldspar, clay and hot mineral water. The agricultural and forestry land fund in the province is still quite large and does not belong to the essential land for food security, while projects in the province are not many. Phu Tho also has 56,000 hectares of natural forest and 60,000 hectares of planted forests - major sources for the paper and tea industries.


Phu Tho is also the country’s centre of society, culture and humanity, known as the Ancestral Land. With a lot of beauty spots and cultural products such as Xuan Son National Park, Hung Temple Festival, Bach Hac Festival and Xoan singing, let alone 1,372 cultural and historical relics, the province has favourable conditions for tourism development. Besides, the province has about 800,000 people of working age, of which over 33.5 percent have professional training, and are thus capable of meeting manpower demands of industrial and service projects.


Resolution 37-NQ/TW of the Politburo (9th term) and the Decision of the Prime Minister defined Phu Tho as the centre of economy, culture, education, training, science and technology of the region. This will also enable the province to receive more support and investment for developing basic infrastructure, health, education, training and poverty reduction and promoting socioeconomic development. 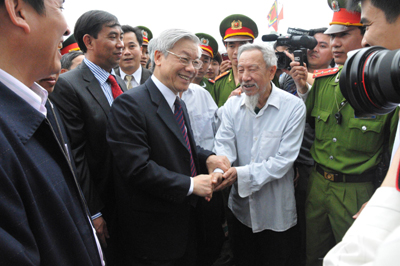 Phu Tho province successfully hosted the 18th Provincial Party Congress of the 2015 - 2020 term (on September 28- 30, 2015). How do you assess Phu Tho province’s remarkable economic development results in the latest five years?
In the past five years, despite facing numerous difficulties and challenges, with innovative thinking and active working manner, Phu Tho province has constantly combined its external cooperation expansion with investment promotion, thus obtaining important results. Average annual economic growth was 5.87 percent to bring its gross domestic product (GDP) to VND40,400 billion, an increase of 84 percent - the highest in the Western Northwest Region; GDP per capita was VND29.5 million, up 77.4 percent over 2010; the economic structure was positively shifted towards a desired pattern with the share of proportion of industry and construction raised to 36.5 percent, the share of services increased to 38 percent, and the share of agriculture and forestry decreased to 25.5 percent; tax revenue climbed 16 percent a year; exports jumped 19.9 percent annually; and the poverty rate slid to 7.89 percent (much lower than the average rate of 15.5 percent in the Northwest).


Specifically, Phu Tho has successfully deployed three breakthrough development stages. The first stage is the investment for important socioeconomic infrastructure. The province has established essential infrastructure systems for transportation networks, industrial zones, and cultural and social works. The second breakthrough stage is human resource training. Besides, tourism infrastructure has been invested to bring important tourism projects into operation in the province.


However, the province has also seen some development limitations such as small economic scale, weak competition, insufficient socioeconomic infrastructure for development, and limited quality of some social aspects. These are also development issues that need to be addressed in the 2016 - 2020 period. 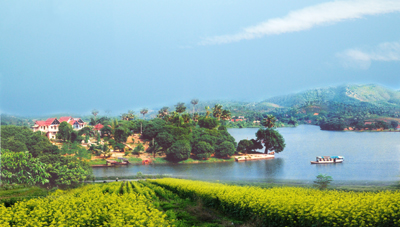 Phu Tho province has defined 17 key socioeconomic development indicators in the 2016 - 2020 period and put forth directions and solutions to realise these indicators. Would you be kind enough to tell us more about these?
With its clear definition of advantages and disadvantages in the 2016 - 2020 period, Phu Tho province set out development directions for the next five years: Promoting synergised forces and effectively utilising potential and advantages, historical and cultural values of the Ancestral Land; focus on carrying out key contents in four breakthrough stages in infrastructure investment, public administration reform, human resources development and tourism for rapid and sustainable economic development; improving the material and spiritual life of the people; and building Phu Tho into the most developed province in the northern midland and mountainous region.


On that basis, Phu Tho province has put forth 20 development goals, including 17 major socioeconomic indicators: Annual GDP growth of 7.5 percent (industry and construction sector will expand 9.5 percent, services sector will grow 7.5 percent, and agriculture, forestry and fishing sector will rise 3.5 percent); GDP per capita of VND52.5 million in 2020; economic structure in 2020 will comprise 41.5 percent of industry and construction, 38.5 percent of services, and 20 percent of agriculture, forestry and fisheries; annual export growth of 12 percent to reach US$1.3 billion in 2020; total social investment in five years will reach over VND95 trillion; poverty rate drop of 1.5 percent a year; Tan Son District will escape the status of poverty; and the percentage of trained labour at 70 percent, among other indicators.


To successfully realise the above objectives, the province has defined and carry out many solutions, with nine key missions as follows: Building and perfecting mechanisms and policies, creating the favourable environment for production, business and socioeconomic development; mobilising a maximum of resources for investment and development to create economic development breakthroughs, especially in essential infrastructure and tourism infrastructure; changing growth model, increasing the share of industry in local GDP; developing all sectors and improving economic productivity, quality, efficiency and competitiveness; strongly improving the quality and effectiveness of education, training, science and technology; strengthening the management of resources use and environmental protection; building healthy cultural life, enhancing information quality; developing literature and arts imbued with the identity of the Ancestral Land; speeding up public administration reform; and enhancing the effectiveness and efficiency of State management, promoting the role of the Vietnam Fatherland Front and political and social organisations.


Ahead of the Phu Tho Investment Promotion Conference 2015, do you have any message or commitment to investors and enterprises?
On the path of integration and development, Phu Tho province always highly values business roles. We are committed to creating the most favourable conditions for businesses to invest and do business in the province, continuously reforming administrative procedures to enhance openness, transparency and ease of administrative procedures, raising provincial competitiveness, and improving the investment and business environment. We pledge to actively build and apply specific mechanisms and policies to encourage and support big projects which will have positive impacts on the province’s economic and social development. Every project, once deployed in the province, will be provided the best support to reduce time and expenses. The success of investors is the success of Phu Tho province.


On behalf of the government and people of Phu Tho province, I respectfully invite investors to Phu Tho. Phu Tho province is committed to creating the best conditions for investors, regarding the work of investors as its own work.