Recently, President Nguyen Xuan Phuc had a working session with Thanh Hoa Provincial Party Committee. He said that the current development of Thanh Hoa was not commensurate with the local potential and requested strong efforts from the province.

According to the report by Thanh Hoa province at the meeting, the bright spot of Thanh Hoa in the first half of this year was the economic growth rate of 13.5%, among the top localities in the country. Its budget collection was set at VND40 trillion for the year, surpassing the estimate of VND28.1 trillion. 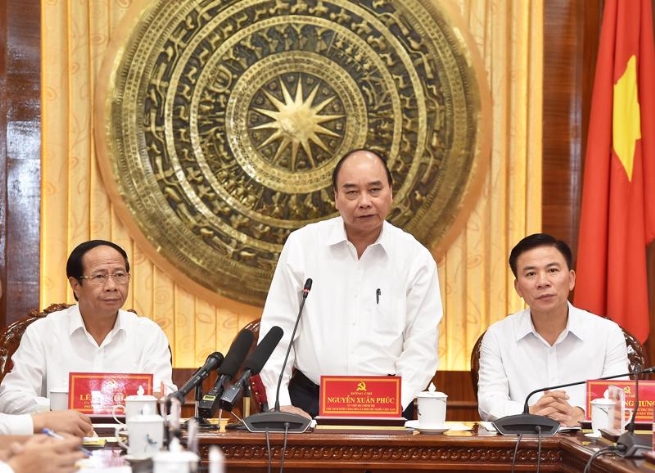 Chairman of Thanh Hoa Provincial People's Committee Do Minh Tuan said that the province would make efforts to build Thanh Hoa into a new growth pole in the North of the country.

"The province strives to disburse 100% of public investment capital in 2022," said Mr. Do Minh Tuan. The province urged investors and contractors to speed up ongoing projects, and complete documents and procedures for approved investment policies.

Mr. Le Minh Nghia, Director of the Department of Planning and Investment, said that Thanh Hoa's GDP accounted for 2.5% of the country's GDP, ranking 9th in terms of GDP scale.

To become the new growth pole, the province determines that industry-construction and services will account for a large proportion of GDP contribution. Thanh Hoa has planned industrial parks, clusters, focusing on infrastructure to attract investment. In the past time, Thanh Hoa has always been among the top localities in terms of investment attraction, attracting about VND150 trillion each year.

As Thanh Hoa's GDP growth rate ranked fifth in the country, Deputy Minister of Planning and Investment Nguyen Thi Bich Ngoc assessed that Thanh Hoa's room for urban economic development was very large and the province needed to soon complete provincial planning to be able to calculate the development space and handle the current inadequacies.

According to Deputy Minister of Culture, Sports and Tourism Trinh Thi Thuy, Thanh Hoa is like a miniature Vietnam, with many conditions for tourism development. Thanh Hoa is rich in revolutionary historical and cultural traditions, has more than 1,500 historical and cultural relics, and has six monuments recognized by UNESCO. It was necessary to invest in the infrastructure system, Deputy Minister Thuy commented, focusing on investing in upgrading tourism infrastructure.

Expressing his impression of Thanh Hoa province's socio-economic development results, Deputy Prime Minister Le Van Thanh said that within one term, the province's budget revenue had doubled. According to the province's report, in 2021, the budget revenue reached the highest ever, reaching VND40,781 billion, exceeding 53% of the estimate, up 29% compared to 2020.

With an area of over 11,100 km2 and a population of 1 million, Thanh Hoa has a lot of potential in terms of labor and land. According to the Deputy Prime Minister, with an impressive increase in the budget, reaching the budget revenue figure of VND70 trillion is in the near future. The province will have more resources for development investment, especially in the development of ethnic minority areas.

Thanh Hoa currently has all five types of traffic with road traffic developing strongly. In 2022, the Mai Son - National Highway 45 will be inaugurated, followed by others in 2023 and 2024. The Deputy Prime Minister believed that in the next five years, Thanh Hoa would have a breakthrough development.

Commenting on the development of the province, Deputy Prime Minister Le Van Thanh said that Thanh Hoa should continue to highly focus on infrastructure development, and improve the business investment environment.

Speaking at the meeting, President Nguyen Xuan Phuc said that according to historians, the name “Thanh Hoa” had started in 1029 under the reign of King Ly Thai Tong. So, there are only seven years left until the 1,000th anniversary of the province.

Therefore, the President said that Thanh Hoa province must continue its strong efforts, especially when Thanh Hoa has all the advantages of a “miniature Vietnam".

Toward the 1,000th anniversary, the President proposed that by 2029 the province must create a comprehensive breakthrough: rapid economic growth, outstanding progress in social security, culture and environment, and improvement in the material and spiritual life of the people so that Thanh Hoa could fulfill the aspirations of the pioneers and President Ho Chi Minh's desire to turn Thanh Hoa into a model province.

Strongly supporting the goal of turning Thanh Hoa into a new growth pole, along with Hanoi, Hai Phong and Quang Ninh and forming a development quadrangle in the north, the President suggested that the province make good use of special mechanisms approved by the Central Government to create a breakthrough, including Resolution 58 of the Politburo and Resolution 37 of the National Assembly. The province needs to promote human resources, and invest in forming a high-quality university to supply human resources for Thanh Hoa province and other localities.

The province needs to continue to well implement social policies and ensure social security, especially in the post-COVID-19 period, actively and effectively implement the Government's support packages; pay attention to job creation, and vocational training, and give priority to the poor and ethnic minorities. In particular, President Nguyen Xuan Phuc noted that economic development must be closely linked with cultural development, the implementation of progress and social justice. It is important to preserve and promote the local cultural identity, arouse national pride, and aspiration to develop the homeland and the country.

At the same time, it needs to focus on firmly ensuring national defense and security, improving the efficiency of international cooperation, strengthening cooperation and friendship with localities of Laos, and building a clean, strong Party Committee and political system with integrity.