APEC 2017 is an international event of great importance to Vietnam and the business community. The first APEC Senior Officials Meeting (SOM1) took place in Nha Trang City from February 18 to March 3, 2017, making a start of the year of APEC Vietnam 2017, and Khanh Hoa Salanganes Nest is proud to be chosen to serve delegates.

Salanganes nest is a very nutritious food for the rich in Eastern countries like Japan, Korea, China, Vietnam and many other countries. In Vietnam, the edible bird nest is mainly distributed in central coastal and southern provinces. The central coastal province of Khanh Hoa is the largest swiftlet colony in Vietnam. The output of swiftlet nest collected on islands has been on continuous rise, reaching over 3,400 kg a year. With special geochemical origin and rich minerals in bird caves, the birds make nests with typical odour and very high nutritional value. Especially, only some natural caves in Khanh Hoa have blood nests and pink nests with miraculous nutrient contents which contain a lot of amino acids very good for human health and body.

To effectively exploit and raise the commercial value of bird nests, Khanh Hoa Salanganes Nest Company has carried out many consistent technical solutions at bird caves and increased productivity and quality of swiftlet nests over the years. The company has brought into full play its strengths as a direct operator of island bird nests and taken the lead in natural bird nest output in Vietnam and Asia. At the same time, the firm has worked with relevant units to support, restore and develop natural bird nests in central coastal provinces stretching from Quang Binh to Con Dao, and recovered bird nest development potential in Khanh Hoa and in the country.

In addition, the company always focuses on improving product quality to meet ISO, HACCP and GMP standards and other international standards. Currently, its products have been exported to key markets such as Australia, Canada, Taiwan, Singapore, South Korea, Japan, Hong Kong and the United States. 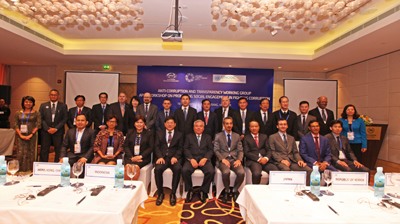 Brand chosen for APEC 2017
The Asia-Pacific Economic Cooperation (APEC) is an important diplomatic event of Vietnam in 2017, organised in many localities such as Da Nang, Hanoi, Ho Chi Minh City, Hoi An (Quang Nam), Can Tho, Ha Long (Quang Ninh) and Nha Trang (Khanh Hoa). The first APEC Senior Officials Meeting (SOM1) took place in Nha Trang City from February 18 to March 3, 2017, making a start of the year of APEC Vietnam 2017 and Khanh Hoa Salanganes Nest is proud to be chosen to serve delegates at this event.
With 2,500 international delegates attending the APEC 2017 event in Nha Trang, this was an opportunity for Khanh Hoa Salanganes Nest Company to introduce its products to international friends. On February 27, Mr Matthew J. Matthews, Deputy Assistant Secretary of State of the United States, highly appreciated Khanh Hoa province and its enterprises for their efforts to introduce typical products at the APEC event. Khanh Hoa province entreated APEC delegates with rare local specialties, particularly highly valued Sanest bird’s nest. This is a relatively strange and unique product to delegates because it is rarely seen in other parts of the world.

Indeed, it is not the first time for Khanh Hoa Salanganes Nest Company to offer its products to international friends at APEC 2017 in Nha Trang City. In previous years, the company strived to introduce the image and brand name of the specialty in the world, including high-standard markets such as the United States, Japan and South Korea. The company has opened many representative offices and agents in many countries around the world to promote and introduce its Sanest products to customers across the globe. The presence of its bird nest products in other countries brings in revenue for the company and also introduces a valuable and unique product originated from Khanh Hoa province, Vietnam. This will become a discovery-worthy address when they set foot in Vietnam.