What were the main socio-economic growths of the province in 2016?
In 2016, GRDP growth was 7.93 per cent (above Vietnam's national average of 6.21 per cent); GRDP per capita was VND50 million; economic transformation was in good direction; GDP increased and attained the target. Agricultural production continued growth. Total value of agriculture, forestry and fisheries increased 5.2 per cent (compared to 0.65 per cent of the whole country). The product value per hectare in 2016 was VND150 million (VND80 million of the whole country).
Currently, Lam Dong is leading the whole country in hi-tech agriculture, with over 49,000 hectares. Meanwhile industry, especially the processing industry, is seeing stable development. Export value is estimated at US$455 million. The service sector continues promoting growth with 5.4 million tourists, or increase of 5.9 per cent compared to last year.

Progress has also been recorded in other sectors: household poverty has been reduced to 5.17 per cent, 1.5 per cent less than the beginning of the year, with 16.1 per cent of minority nationalities, 3 per cent less. New rural development plan has been largely participated by the people with 58 communes and a district attained the targets. Social security has been maintained.

In road networks, the province has coordinated with Ministries of Transport and Planning & Investment to upgrade major national and provincial highways such as Highways 20, 27; Highway 28 with the section against floods caused by Dong Nai 3 and 4 hydropower stations; Highway 28B, provincial roads 723 and 721. Meanwhile, Dau Giay–Prenn (Da Lat) highway is a high priority with a section of 19.2 km from Lien Khuong to Prenn pass completed in 2008 and together with neighbouring Dong Nai province and related ministries to build the remaining section and by the end of 2017 starting the construction of 60km from Dau Giay to Tan Phu (Dong Nai).

For provincial networks, Lam Dong allotted VND2,463 billion in 2010-2016 for infrastructure development. Together with other provinces, Lam Dong took the lead in developing rural roads. 1,794 km rural roads had been built with VND1,794 million in 2010-2016. So far, 60/117 communes have attained the criteria of new rural standard and 82/117 communes of communication standard.

Due to disadvantages caused by terrain structure and natural conditions, Lam Dong gives priority to the development of airlines. In conjunction with the Ministry of Transport, the province has upgraded Lien Khuong Airport to 4D by ICAO standard. The airport can now operate 6 local flights and one international arrival/departure with Wuhan (China). It is expected to soon have 2 more local flights, and international flights to Thailand, South Korea and Singapore. 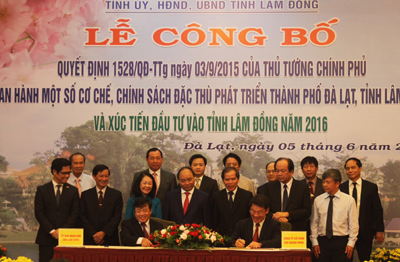 Regarding its advantages in agriculture, especially hi-tech agriculture, how will Lam Dong develop this together with other priorities?
With advantages in land, water, workforce and eco-system for cash crops such as forestry, dairy, vegetable, flower, Lam Dong has decided that hi-tech agriculture is the key factor for agricultural production, increasing efficiency and income for the people. Some 50,000 hectares are under hi-tech production, 17.7 per cent of agricultural land, with equivalent regional and international standards and accounting for 30 per cent of agricultural production value, increasing 25-30 per cent and average of VND500 million per hectare a year in 2016, and presently 11,000 hectares of over VND500 million per hectare/year and 700 hectares of VND1–3 billion.

To develop further the efficiency of hi-tech agriculture, the province has called on local and foreign investors to take advantage of all potential. So far, there are 253 local invested projects (registered capital of VND15 trillion) and 106 FDI projects (registered capital of US$480 million) concentrating on agriculture and forestry with 154 projects of hi-tech agriculture. To increase the efficiency of hi-tech agricultural projects, the province gives high priorities to the investors such as granting land use from non-efficient projects and match-making farmers and investors. The province also supports the training of rural workers meeting the demand of investors with VND400,000/person/month for three months, 3 per cent of interest at commercial banks, credit guarantee as Decision 2153/QD-UBND, as well as policy promoting investments, developing markets and trademarks.

Investors in hi-tech agriculture in Da Lat city and the vicinity will have tax exemption for imported equipment and materials for greenhouses of hi-tech vegetables and flowers. Annually, the province will reserve a major part of the budget for infrastructure and water conservancy for agriculture, especially hi-tech agriculture.

To ensure fast and stable socio-economic development, what are the main tasks of the province in 2017?
From the beginning of the year, related authorities of the province have developed plans and specific programmes of action for socio-economic development in 2017, with high determination to attain the targets set for 2017 and 2016-2020, focusing on economic restructuring, developing new growth models, increasing productivity, quality, efficiency and competitiveness, ensuring fast and sustainable economic development. The province will continue to restructure investment with a focus on the public sector, successfully implement the public investment plan of medium term 2017-2020 and high priorities for four main programmes, 12 key projects, especially mobilisation of resources for early construction of Dau Giay-Lien Khuong highway.

Besides economic development, the province will promote cultural and social activities, carrying out policies on social welfare, improving living conditions of the people, reducing household poverty by 1-1.5 per cent in the end of 2017.