The Look Flourishes from the Traffic Works

Up to now, Hung Yen province has put on a new face and is one of the provinces that completed the National Target Program on New Rural Construction early, this achievement has an important contribution from the transport sector. The transport network in the province is relatively complete, well serving the travel needs of the people and the socio-economic development of the province. 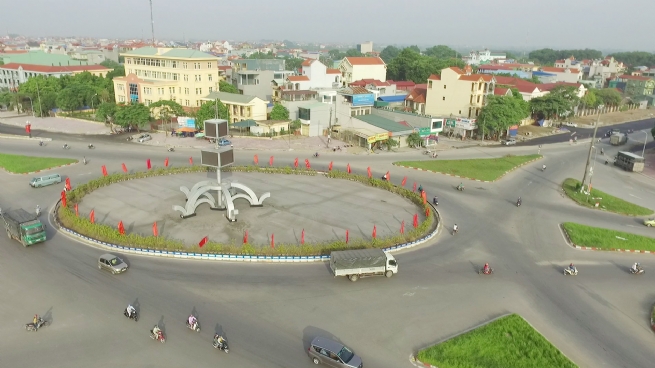 Right from the beginning of the term, the Department of Transport actively advised the Provincial Party Committee and Provincial People's Committee to issue a number of important resolutions and action plans to serve as a basis for long-term transport investment and development planning, which were Resolution 08-NQ / TU on Hung Yen province’s transport development program in the 2016-2020 period, with a vision to 2030; and Decision 3353 / QD-UBND on approving the adjustment of the Master plan for transport development of Hung Yen province in the period of 2011 - 2020, with a vision to 2030.

In recent years, the Department of Transport has actively and creatively advised the Provincial Party Committee, People's Council and Provincial People's Committee on many solutions and measures, and mobilized many sources of capital to invest in transport infrastructure and achieved many positive results. The traffic infrastructure has had great development, many important and essential works have been put into use as completed, including Phase 1 road connecting Hanoi - Hai Phong expressway with Cau Gie - Ninh Binh expressway and Hung Ha Bridge; completing La Tien Bridge and DT.386 road; expanding National Road 38 at the section passing through province; and investing in projects on the North-South economic backbone of Hung Yen province with DT.281 in Bac Ninh province. Since 2016, the province has invested in upgrading, expanding and building more than 1,300 km of roads of all types, including 87.4 km of provincial roads and 4 bridges on provincial roads with a length of 118.9m, forming a network of transport infrastructure systems which is quite sustainable and developed, fulfilling the target of 145 / 145 communes meeting the criteria for rural transport in the construction of new countryside (reaching 100%), it can be said that this is a huge contribution of the sector to the program of building new countryside.

In the coming years, the socio-economic development and national defense and security assurance of the province will continue to pose new requirements, tasks and challenges to the transport sector, requiring the transport sector to strive hard and cooperate with other sectors, levels and the whole society to overcome difficulties and challenges in order to create fundamental and comprehensive changes in transport infrastructure development. On the basis of the achievements and lessons learned in the implementation process, the transport sector will continue to advise the province to build the provincial transportation network as planned. It will well exploit national and regional traffic routes passing through the province, invest in phase 2 of the road linking Hanoi - Hai Phong expressway with Cau Gie - Ninh Binh expressway; the project on improving and upgrading National Highway 39 from Ly Thuong Kiet intersection to National Highway 5 connecting to the North-South economic backbone of the province. It will advise the province to invest in provincial road system according to planning such as focusing on building and completing investment projects to improve DT.387, DH.17 roads extending to DT.379, DT.382B and DT.379 roads according to the second level scale; and the project of the North-South economic backbone of the province will reach the planned level of district roads and rural transport.

In order to diversify investment capital flows, the Department will pay attention and promote the efficient use of supporting capital sources from the Government, ministries, central sectors and other capital sources. It will have preferential policies for businesses and investors to invest in rural transport infrastructure. It will closely coordinate with investors, adopt appropriate policies according to regulations to accelerate the site clearance progress of projects to ensure investment progress and efficiency. It will reserve a reasonable land fund for transport infrastructure development. It will also continue to affirm the important role of the transport sector in local development.