Exploring Dien Bien Phu city or Dien Bien province as a whole is always an attractive tour program for domestic and foreign tourists. Coming to Dien Bien early this year, visitors will have the opportunity to explore the splendid victory of the old battle that “amazed the world.” 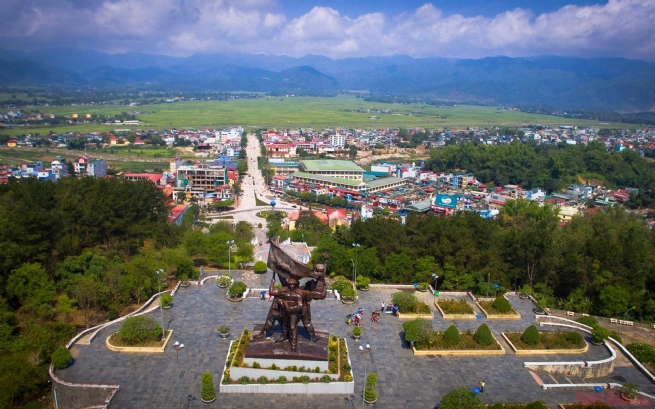 The first destination on the Dien Bien discovery itinerary is Hill A1, east of the headquarters Dien Bien Phu fortress complex. Hill A1 is the most important high point of five eastern hills defending Muong Thanh Center. Powerful personnel and firepower were installed here with strong fortifications, causing a lot of difficulties for our army to attack this position. After 39 days of persistently digging an underground tunnel to place explosives, weighing nearly 1,000 pounds, on May 6, 1954, the explosives were detonated and the Vietnamese army defeated this fortress. This victory opened the final assault on the headquarters of the fortress complex to end the battle with eventual victory.

Dao Tuan Hung, tour guide at Viet My Travel Company, said, Hill A1 is the most important stronghold of French colonial troops in Dien Bien Phu fortress complex. Today, coming to Dien Bien Phu, visitors will see the Hill A1 Memorial at the northern top with two 18-ton tanks that French colonialists brought to Muong Thanh to counterattack our army. Another relic is a pond-sized bomb crater, a result of 1,000-kg explosives placed by our warriors under the hill. After Hill A1, tourists will come to Chien Cong (Military Feat) Hill, a place that clearly shows the tenacious fighting spirit of our troops and people to the critical victory that shook the whole world.

Lying next to Hill A1 is Dien Bien Phu Victory Museum, an attractive destination on the journey to Dien Bien Phu City. The museum was built in 1984 to celebrate the 30th victory anniversary of Dien Bien Phu Battle. Le Thi Dung, narrator at the museum, said, there are 500 precious artifacts that recreate the heroic historical victory of the nation. The museum is divided into four main themes. The first is a summary of eight years of the resistance war against French colonialists from September 1945 to September 1953. The second displays the plot of French colonialists and the policy of our Party. The third portrays the historical Dien Bien Phu Campaign. The fourth depicts the domestic and international impacts of the Dien Bien Phu victory. The museum upholds the significance of the world-shocking illustrious victory and expresses the pride of our people in the faithful resistance against French colonialists.

The command bunker of General De Castries, located in the center of Dien Bien Phu fortress complex in Muong Thanh field, Dien Bien district, Dien Bien province, is built very solidly with iron arches, wooden planks, sandbags, and barbed wire fences. To date, the command bunker still retains its structure and layout as it was more than 60 years ago and is an indispensable magnet on the Dien Bien discovery journey.

For a long time, Dien Bien Phu has been a historical relic of special importance for the country, a clear proof of one of the fiercest wars in the world. Perhaps, it is rare to find another place with so many valuable historical sites and vestiges as in Dien Bien province. Therefore, there are still many other places in Dien Bien for tourists to discover.