That is the message that Mr Nguyen Duc Vinh, Chairman of Khanh Hoa Provincial People’s Committee, wants to send to investors who are or will be investing in Khanh Hoa province, in an exclusive interview granted to Vietnam Business Forum Magazine’s reporter. “Khanh Hoa always welcomes investors to invest in all areas in the province, especially tourism, service, shipbuilding, seafood processing and socialised investment. When they invest in Khanh Hoa, they will side with the province in achieving socioeconomic development. Their success is the success of the province,” he said. Quoc Hung reports.

In the eyes of investors, Khanh Hoa is one of the provinces with impressive acceleration in socioeconomic development. How has the economy and society of Khanh Hoa province changed?
In the current context of globally and regionally complicated situations, the world economy recovered slowly and the domestic economy still faced many hardships, but with the resolution of the entire political system from the province to the grassroots and with the consensus of the people, the economy and society of Khanh Hoa province have developed strongly in recent years. Specifically, the economy has grown stably, with gross regional domestic product (GRDP) rising 5.86 per cent a year, of which GRDP by sector climbed 5.97 per cent. GRDP per capita reached VND47.03 million in 2016, an increase of 1.25 times over that in 2013 (VND37.65 million). The economic structure was shifted towards an expected pattern, with a rising share of service, industry and construction, and a declining share of agriculture, forestry and fishery.

Social security is always closely directed and effectively implemented by the province. Poverty reduction policies and projects are carried out in a coordinated and effective manner, integrated with key programmes, mainly rural development programmes and socioeconomic development programmes for ethnic minorities and mountainous areas. The poverty rate was 7.55 per cent at the end of 2016. 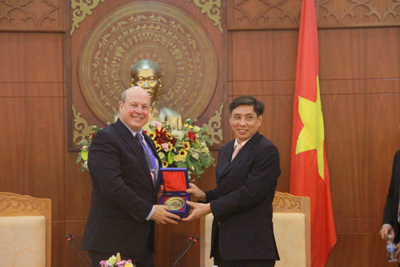 Khanh Hoa province aims to become a centrally governed city by 2025. How do you perceive the advantages and challenges in implementing this great goal?
Regarding advantages: The economy will continue to grow, with the economic structure shifting towards the right direction. Strong business development, progressive business start-up and synchronous tourism development policies actually drive the province’s development. Marine economic development will tap local development advantages and potential.

Planning is paid special attention by all levels and sectors. Urban construction planning has been started to bring in effective results. Synchronous infrastructure system has been developed as planned, especially key driving infrastructure works.

In particular, Nha Trang City will have synchronous and modern infrastructure gradually completed and expanded towards the west and south, as planned. The province will build new multifunctional urban zones in line with new future development requirements of Nha Trang City which will be a core central, civilised and modern urban area. This will contribute to the overall socioeconomic development of the province and the southern central coastal region.

With respect to challenges, some criteria subject to the first-grade centrally run city have yet to meet regulatory standards. This is an inevitable result of underperforming economic growth in relation to local potential and advantages.

To achieve that goal quickly and build Khanh Hoa into a place worth living in for all citizens and visitors, what actions and solutions is the province taking from this point?
In order to quickly achieve its goal of becoming a centrally-run city and a place worth living for all residents and visitors, Khanh Hoa province has developed and announced action programmes with the following key tasks and solutions:

First, focusing on economic development and social security: The province will develop the economy commensurate with local potential and advantages, especially tourism and marine economic development; develop business, encourage business start-up, support business development and see business development as the key to economic growth. Khanh Hoa will integrate economic growth with social progress and justice. It will prioritise scientific and technological development and transfer, especially modern ones, as the key to raise economic productivity, quality and competitiveness; continue to accelerate administrative reform; review organisational structure and personnel at State bodies towards productivity and efficiency; build a complete information system to serve the implementation of e-governance and provincial administration modernisation. It will step up the carrying out of Government Resolution 19/NQ-CP to improve and raise the Provincial Competitiveness Index (PCI), and create favourable conditions for business investment and production. 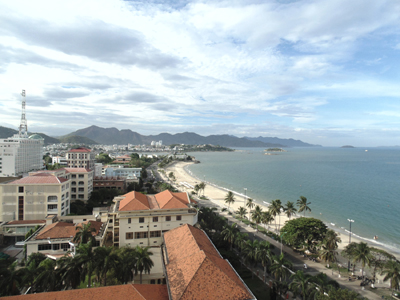 Khanh Hoa Provincial People’s Committee issued Decision 11/2016/QD-UBND dated June 17, 2016 on land, housing and infrastructure rent exemption and reduction in education and training, medical, cultural, sporting, environmental and judicial expertise projects in the province. Accordingly, land rent is exempted for all investment projects in all districts, towns and cities except for Nha Trang City; a 50 per cent rent reduction is applied to investment projects in Nha Trang City; and a 50 per cent house rent reduction is applied to socialised projects.

Besides, investors will be actively supported with administrative procedures relating to investment, tax and customs by the province, in addition to overall support provided by the Government of Vietnam.

As a provincial leader, what message do you send to businesses and investors?
Khanh Hoa always welcomes investors to invest in all areas in the province, especially tourism, service, shipbuilding, seafood processing and socialised investment. Regarding investment, land, construction and other procedures, provincial and local governments will provide the most favourable conditions for enterprises to bring their projects into operation as soon as possible.

In the spirit of Government Resolution 19-2017/NQ-CP dated February 6, 2017 on continued implementation of major tasks and solutions for better business environment and national competitiveness in 2017 and to 2020, and Government Resolution 35/NQ-CP dated May 16, 2016 on business support and development to 2020, the Provincial People’s Committee of Khanh Hoa promulgated action programmes to carry out business-enabling, business-serving State policies. Investors coming to Khanh Hoa must be serious and really love Nha Trang, Khanh Hoa.

Under the guiding principle of “Investing in Khanh Hoa, investors work alongside the province in socioeconomic development; their success is the success of the province,” Khanh Hoa is always willing and ready to welcome all domestic and foreign investors to do business in the province, and join forces for a more prosperous, civilised Khanh Hoa.