To learn about operations of FLC Group in Thanh Hoa province and the overview of the local investment environment, the Vietnam Business Forum had an interview with Mr Trinh Van Quyet, Chairman of the Board of Directors of FLC Group. Ngo San reports.

Perhaps, it is known to all that FLC Sam Son project of FLC Group was built in a largely marshy area where almost no economic value was seen. The project was carried out in less than a year, a record short time of construction in Thanh Hoa province.

It is noteworthy that in many other localities, we might have needed nine months to complete the procedure of the project - enough time for us to complete a resort covering over 200 ha!

There are many factors for us to make that record but I want to stress on a very important factor - the attractive investment policy of Thanh Hoa province, the support of local agencies for the project and for the investor.

As we all know that if the potential of the market in general and of the locality in particular is a prerequisite when an investor considers investing in a certain field and in a certain place, the investment environment in such a locality is a sufficient condition. A good investment environment will greatly save project development costs, including both financial costs and time costs.

I think that FLC Sam Son project is a proof of success of Thanh Hoa in attracting investment to tap local advantages.

The project operation has helped significantly change the tourism outlook of Sam Son Town in particular and Thanh Hoa province in general. This is very clear as you have witnessed.

Positive effects from this change come almost instantaneously. For example, the number of tourist arrivals to Sam Son surges, with millions more each year. The project has also brought employments and incomes for locals and more incomes for the State Budget as well. 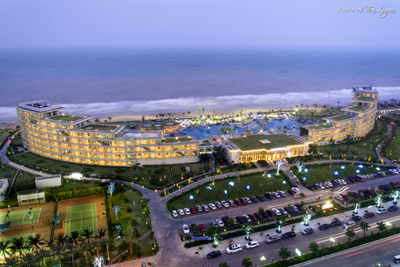 In the coming time, will FLC Group expand its projects in Thanh Hoa province?
With VND17,000 billion pledged to be invested in nine projects in Thanh Hoa, FLC Group keeps expanding its investment in this land. In just a few weeks to go, we will inaugurate the FLC Lux City Sam Son tourist, commercial and entertainment complex, including 5-star FLC Grand Hotel Sam Son.

In addition, a range of exciting recreational facilities are also built to bring a relaxing, enjoyable experience for tourists.

From the perspective of an entrepreneur, what do you think Thanh Hoa needs to do to attract more investors?
With all the sense of responsibility of the largest investor in Thanh Hoa province up to now and an investor who has a long-term commitment and commitment and sides with the province’s socio-economic development, I would like to give some frank recommendations.

Firstly, with what it has done to attract investment, Thanh Hoa province can do better and should do better. In fact, it is, and will be, competing with many other provinces with their own appeals to investors and efforts to improve their investment climate.

I would like to stress that, in the context of the Government policy on public investment reduction, private investment is decisive to local socio-economic development.
Secondly, Thanh Hoa needs to do better to solve problems arising in the implementation of projects, especially matters out of the authority of investors, such as land clearance, resettlement and job change for locals. This is a very sensitive and easily public-misleading issue that may directly affect the performance of projects as well as the prestige and brand name of investors.

Thirdly, Thanh Hoa needs to speed up the construction of infrastructure, including roads, wharves, schools and hospitals. The province can call for investment in this field. State-funded projects should be carried out first, quickly and clearly with recorded proofs. This is an important parameter when investors consider an investment.

Fourthly, regarding the planning issue, I am glad to know that Thanh Hoa province hires a reputable foreign consultant for this work. Planning deployment is, however, more important. Planning must be concretised by policies which must be feasible. I am very concerned about the idleness of very good, very scientific planning.

Finally, as a big tourism investor in Thanh Hoa, I expect the province will have more practical and professional activities in promoting tourism image and brand; actively coordinate with the Government, agencies, organisations and enterprises in Vietnam and foreign countries to host national and international events; and build sector-linked, region-linked tourism products.

The Thanh Hoa Investment Promotion Conference 2017 is a chance for the province to introduce its potential, strengths, priority fields, investment attraction mechanisms and policies. From your point of view, what will remarkably make this conference different?
I think that Sam Son is developing amazingly, evidenced by the approval of Sam Son City establishment by the Standing Committee of the National Assembly in April, making it the second city of Thanh Hoa province.

The establishment of Sam Son City lies in the tourism, cultural and economic development strategy aimed to make it a national tourism city. This will be an important impetus for Sam Son to improve its investment and business environment and develop a friendly and hospitable Sam Son.

Especially, in recent years, thanks to robustly improved public and tourism infrastructure in Sam Son following FLC Group investment projects, Sam Son has been gradually becoming a magnet to big investment flows. They have helped change the face of Sam Son towards urban modern, high-class urbanity and created a strong force and position for its rapid and sustainable development.

I believe that Sam Son will soon become a modern and worth-living city as expected by leaders and people of the province. And, FLC Group will continue to accompany Sam Son in particular and Thanh Hoa province in general on this road.