With ongoing efforts of the Party, the government and people, Dong Thap province has built a fine image in the eyes of businesses, tourists and people throughout the country, as it always stands near the top in the nationwide Provincial Competitiveness Index (PCI), the Vietnam Provincial Governance and Public Administration Performance Index (PAPI), rice output and aquatic output. However, never being self-satisfied with its achievements, Dong Thap has constantly endeavoured to shed brighter light on the “positive” and “unique” values and images that create an attractive and distinctive brand of Dong Thap. To learn about the resilience of the “Pink Lotus Realm”, Vietnam Business Forum has an interview with Mr Nguyen Van Duong, Chairman of Dong Thap Provincial People’s Committee. Truong Thanh reports.

Dong Thap ended the year 2016 - the banner year of enforcing the Resolution of the 10th Provincial Party Congress - with many important socioeconomic development achievements. Could you please share more about this success?
In 2016, despite facing numerous difficulties and challenges on adverse climate impacts and difficult export markets, the determination of the entire political system, the dynamism and creativity of the business community and the consensus of the people enabled Dong Thap to overcome difficulties to achieve important results in many fields. The economic growth climbed 6.38 per cent, with the gross regional domestic product (GRDP) ranked sixth in the region and quite high in the country. Importantly, the province focused on improving the investment and business environment, business support and development in the spirit of the Government Resolutions 19 and 35; launched strong start-up movements; created many communication channels to connect businesses and timely settle emerging matters in investment, production and business operations. Especially, the province was ranked third in PCI in 2016, the ninth straight year in the Top 5. It also topped the nation in administration quality.

With constant efforts to boost local images, in 2016, Dong Thap attracted more than 2.5 million visitors for the first time, including 60,000 foreigners, the largest number among six eastern Mekong Delta provinces. Tourism revenue exceeded VND480 billion, 6.66 per cent higher than the full-year plan. Overseas manpower supply also brought in practical effects, with over 1,100 labourers sent to work overseas for definite durations, thus standing top in the Mekong Delta. Dong Thap is also interested in calling for socialised investment in education and public-private partnership (PPP) investment in health in order to provide better care for the people.

What groundbreaking steps did the province take to accomplish the above results?
Despite securing a top place in PCI in many years, Dong Thap is not satisfied with this outcome, but it still made every effort to improve the business environment. First of all, it shortened the time, simplified investment procedures, and carried out consistent business development support policies. Currently, business registration can be done online in Dong Thap and the tax code granting requires only one working day.

In 2016, the province issued a resolution on small and medium enterprises (SME) development with many preferential policies and promulgated an action plan for business start-up. Especially, we reduced 30 per cent of meetings to dedicate time for visiting the grassroots and timely dealing with emerging issues in production and business. We also established many communication channels to listen and timely solve difficulties and problems in production and business (Business Coffee Bureau at the Office of the Provincial People's Committee, receiving feedback via Facebook, establishing the earliest public administration centre in the Mekong Delta, etc.). 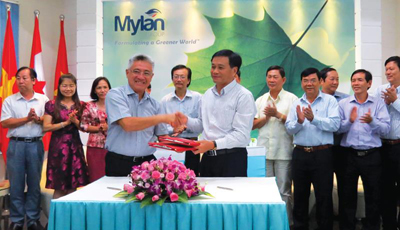 What will the province focus on to position and build up the image of "Dong Thap - Pink Lotus Realm" and shed brighter light on the “positive” and “unique” values and images that create its attractive and distinctive brand?
In order to promote its achievements, in the coming time, we will mobilise both the entire political system to add more efforts to improve the investment and business environment, build a friendly and popular government and support the business community with the motto “Reducing power, increasing responsibility and sharing difficulty”, gradually shape an attractive and safe investment environment, position itself as an ideal place for start-up projects engaged in agriculture, processing industry, tourism, telecommunications and finance. We will create a dynamic, innovative, culturally-minded and entrepreneurial community in Dong Thap province well-connected in production, responsible to society and cooperative with the government to accelerate socioeconomic development.

In order to create a distinctive image of “Dong Thap - Pink Lotus Realm” and further promote “positive” and “distinctive” values and images, we will effectively implement Decision 05-NQ/TU dated August 17, 2016 of the Executive Board of the Provincial Party Committee on branding the image of Dong Thap province, particularly consistent solutions on building identity systems, promoting communications and engaging in local image promotion events.

We will also strive to create the image of Dong Thap by effectively carrying out socioeconomic development programmes and projects such as agricultural restructuring scheme and tourism development scheme, by creating locally featured hi-tech agricultural products and tourism products to bring the image of Dong Thap nationwide and worldwide. We will develop synchronous transport infrastructure systems to connect Dong Thap with other localities in the Mekong Delta, complete mechanisms and policies to attract investment capital, raise local competitiveness, enhance business performance and improve the material and spiritual life of people.

With hundreds of billions of Vietnamese dong of investment capital each year, Dong Thap province has completed the hamlet-to-hamlet transportation system. In addition, the Government of Vietnam invested in key projects such as Road N2, Cao Lanh Bridge, Vam Cong Bridge - expected to be inaugurated by the end of 2017 to connect Dong Thap with major economic regions and generate an important impetus for local socioeconomic development.

In 2017, Dong Thap expects to achieve a 7.5 per cent economic growth and fulfil all socioeconomic development targets set in the Resolution of the 10th Provincial Party Congress. What are the key solutions that the province has focused on implementing?
In 2017, Dong Thap expects an economic growth of 7.5 per cent, to rank fourth in the Mekong Delta, GRDP per capita of VND37.8 million, and total social investment capital of VND16,316 billion.

Despite numerous difficulties, Dong Thap will not pursue growth targets at all cost, but focus on economic development to tackle social issues such as poverty reduction, improving access to health services, education and people’s livelihoods.