Consistent investment support and encouragement policies and efforts to reform administrative procedures and improve the investment environment have helped industrial zones of Soc Trang province to mobilise domestic and foreign investment capital to create driving forces for economic restructuring towards industrialisation and modernisation and contribute to economic growth of Soc Trang province in particular and the entire Mekong Delta region in general. The following is the conversation with Mr Lam Hung Kien, Director of Soc Trang Industrial Zones Authority. Hoang Lam reports.

Could you tell us more about investment attraction results in Soc Trang province-based industrial zones to date?
According to the Prime Minister’s decision on industrial zone development to 2015, with an eye to 2020, Soc Trang province will have six industrial parks with an area of 1,109.33 ha, namely 243.38-ha An Nghiep, 122.95-ha Tran De, Dai Ngai, My Thanh, Vinh Chau and Long Hung. Specifically, An Nghiep Industrial Park was completed and put into operation in 2005 and Tran De Industrial Park is clearing the ground, settling land compensations and preparing to submit a scheme on investment attraction for technical infrastructure construction in the form of public-private partnership (PPP). In addition, in response to the Prime Minister’s conclusions at the meeting with the Soc Trang Provincial People’s Committee on April 23, 2016, the Soc Trang Industrial Zones Authority is coordinating with relevant departments and branches to survey and elaborate the scheme on adjustments and supplements to industrial zone planning to eliminate unsuitable industrial zones and add new effective ones.

An Nghiep Industrial Park housed 39 investment enterprises which hired 138.4 ha of land as of August 2017, an occupancy rate of 80.2 per cent. Tenants registered to invest VND3,301 billion and employed 27,500 workers. Their industrial production value (based on the constant base price in 2010) was VND5,762 billion in the first five months of 2017 (including VND337 billion of foreign direct investment (FDI) enterprises), up 9.45 per cent from a year earlier and equal to 65.48 per cent of the full-year plan, contributing 36.1 per cent of the province’s industrial value. In addition to economic contribution, An Nghiep Industrial Park plays a significant role in social affairs by providing employment opportunities for tens of thousands of workers, accelerating the shift of labour structure from agriculture to industry and services; and contributing to local social security stabilisation. 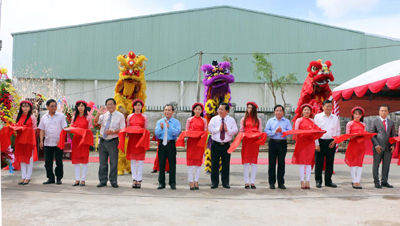 In addition to applying general investment incentives, Soc Trang province has applied flexible solutions to invite and attract more investors into its industrial zones. Could you share about this?
As a coastal province in the Mekong Delta with a 72 km coastal line, fertile soil and temperate climate, Soc Trang's strengths are agriculture, fisheries and marine economy. Besides, the smooth ground transport system with four passing national highways that connect Soc Trang with other provinces and cities in the Mekong Delta and the Southern Key Economic Zone has facilitated Soc Trang to develop industry, agriculture and marine economy.

Beside introducing advantages of input materials, labour, waterway and ground transport, Soc Trang Industrial Zones Authority advised the Provincial People's Committee to issue and carry out consistent investment support and encouragement policies for industrial zones, sped up administrative reform, improved the investment environment and applied full incentives in land, tax and vocational training. In general, investors in industrial zones are enthusiastically instructed and supported by the Soc Trang Industrial Zones Authority and relevant authorities to fulfil mandatory procedures relating to construction investment and land lease. At the same time, investors are also provided with information about domestic and foreign markets and supported with budgets to attend fairs, exhibitions, advertisements as well as vocational training for workers.

Apart from tenants’ positive contributions to local industrial development, the highest concern is how to continuously improve the efficiency of land use in industrial parks and create momentum for developing trade and services and speeding up economic restructuring. So, how will Soc Trang Industrial Zones Authority deal with this issue?
To improve the land-use efficiency in industrial parks and execute Directive 07/CT-TTG of the Prime Minister dated March 2, 2012 on rectification of industrial zone management and performance improvement of industrial zones, export processing zones and economic zones, and fulfil the guidance of the Provincial Party Committee and the Provincial People’s Committee on accelerated land management in industrial zones, the Soc Trang Industrial Zones Authority has coordinated with the Department of Natural Resources and Environment to inspect and review tenants in industrial zones which hired land but not carried out registered projects to take back the land to provide opportunities for other investors. The authority revoked 63.77 ha of rented land from 21 companies since 2013.

In the coming time, the Soc Trang Industrial Zones Authority will advise the Provincial People’s Committee to call on investors to operate industrial zone infrastructure under the PPP form, serving secondary investors to do business in the industrial zones, according to approved plans. As for State management responsibility, the authority coordinates with relevant bodies to quickly clear the ground to hand land to investors and ask central authorities to introduce policies on supporting infrastructure construction outside industrial zones and developing services and auxiliary industries to better back investment, production and business of tenants in industrial zones.

I believe that, by effectively carrying out the above policies and solutions, local industrial zones will achieve more optimistic results and help Soc Trang to realise the goal of becoming a middle industrial province by 2020.