Bac Ninh province has always been a leading light in FDI attraction, as evidenced by the presence of many world-leading manufacturing corporations such as Canon, Samsung, Foxconn, Orion and PepsiCo. The foreign direct investment (FDI) sector currently accounts for over 85 per cent of industrial production value and 99 per cent of total export turnover, making Bac Ninh the sixth largest economy in the country. Its GRDP per capita, industrial production value and export turnover ranked second out of 63 provinces and cities nationwide. FDI is the driving force for Bac Ninh, the smallest province in the country by area, to unlock its potential to reach the current stature. Vietnam Business Forum has an interview with Mr Nguyen Tu Quynh, Chairman of Bac Ninh Provincial People's Committee, on this issue. Tran Trang reports.

From an agriculture-based province with the smallest area in the country, Bac Ninh has quickly risen to become a favoured destination of gigantic FDI projects. What is the key to this success?
In spite of being the smallest locality in the country, it has a very favourable geographic location. The province lies in the Northern Key Economic Region and in the Ha Noi - Hai Phong - Quang Ninh Economic Triangle, where socioeconomic infrastructure systems, including transportation systems, were invested quite early. As a result, Bac Ninh province could easily access international friends and partners. With a long-term vision, a series of investment projects such as expanded National Highway 1, National Highway 18 and Ho Bridge were quickly built and completed to unlock geographic advantages: Being the gateway to Hanoi, the capital of Vietnam, close to Noi Bai International Airport, not far from Hai Phong and Quang Ninh seaports and international border gates. These are the doors for Bac Ninh to quickly integrate with international friends.

In the past years, Bac Ninh has always been considered to have a transparent and friendly business environment. With the motto of "Side by side the businesses" and "Regarding the trust and satisfaction of the business as the core objective to promote economic development, all levels of authorities of the province have made ongoing efforts to enhance the investment environment and raise the provincial competitiveness index (PCI). The province's PCI rankings are always listed among the top. By defining the role of industrial parks and focusing on construction and development of industrial parks in an attempt to become an industrialised province, Bac Ninh soon detailed many industrial parks, infrastructure and utility service development plans. The province actively cleared the land and supported investors to tackle with emerging issues when they carry out their projects. The very ongoing creativity and effort of the province turned countryside fields into modern industrial parks and opened up industrialisation era.

Not only being quick at setting the development direction, the province has also been very creative in its way of doing so. Bac Ninh has targeted multinational conglomerates and persuaded them to locate their projects in the province. Successfully, each industrial park has several gargantuan advanced projects invested by industry leaders which draw their supporting investors. It is the first step that counts. In 2006, Canon started the "wave" of large FDI investors, followed by Foxconn, ABB and Samsung, helping the province to establish the core industry of electronics and telecom. Optimistically, they scaled up their investment value after they started productions. For example, Samsung Display invested US$1 billion in Yen Phong Industrial Park in 2014 and it registered to add extra US$3 billion in August 2015 and additional US$2.5 billion in 2017, bringing its total investment value to US$6.5 billion. There are many reasons for expansion decisions and one of them is investor-friendly policies and inspirational investment environment of Bac Ninh province.

Giant projects invested by multinational corporations have created a vivid image of dynamism and development and also established the brand name of Bac Ninh in the integration process.

After 20 years since the province was re-established, Bac Ninh province’s FDI sector has grown up robustly to become a motivating economic sector, attained important achievements and actively contributed to the economy in the era of industrialisation and modernisation. 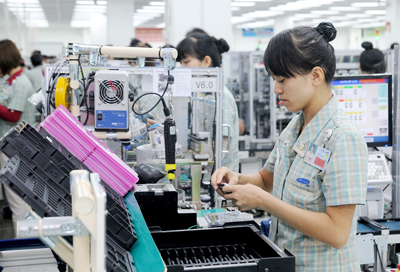 In addition to its potential and strengths, how has the province reformed administrative procedures and improved the quality of its investment environment?
Bac Ninh province has made constant efforts to reform the administration. The province has seen it as a key groundbreaking task to fulfil local political tasks to raise the provincial competitiveness index.

Would you talk about solutions and strategies that Bac Ninh province will adopt to attract more FDI in the coming years?
The FDI sector has become an important economic element of Bac Ninh province. The share of this sector in the province’s gross regional domestic product (GRDP) has increased gradually over the years. Its value increased from VND1 billion in 1997 to VND769 billion in 2000, VND1,504 billion in 2005, VND16,685 billion in 2010, VND68,500 billion and VND97,881 billion in the first nine months of 2017. Foreign-invested, export-oriented manufacturing projects increased rapidly, helping raise the province's export value and export structure of Bac Ninh. Although FDI attraction orientations for industry and construction sectors have been changed in specific fields and products from time to time, the province has still kept encouraging production of new materials, high-tech products, information technology, mechanical engineering, precision engineering and electronics. These projects can also create high added values and hold advantages when Bac Ninh province draws new FDI capital.

Bac Ninh is striving for sustainable development in the coming time based on the harmonious development f urban and rural areas. The core urban area of Bac Ninh will satisfy the first-class urban area requirements in Vietnam. Bac Ninh will also shift from promoting statically comparative advantages to dynamically comparative advantages and promoting competitive advantages in new conditions. It will set up research and development (R&D) centres and high-quality regional human resources training centres, make changes to the service economy and become a centrally-run city and a modern scientific city.

To achieve these goals, Bac Ninh needs to select investment flows, with priority given to FDI projects using environment-friendly advanced technologies, effectively using resources, minerals and land. The province will step up the development of supporting industries, gradually manufacture products alternative to imports in order to create high added values in products and raise budget revenues. The province will try to create stronger driving forces and ripple effects on domestic enterprises to cooperate with each other to develop together and develop the economy and society as designed by the Resolution of the 19th Provincial Party Congress.