Among eight main tasks and five groups of solutions adopted by the Resolution of the 15th Quang Binh Provincial Party Congress (2015 - 2020 term), reforming administrative procedures, improving the business environment, enhancing competitiveness, attracting investors and creating favourable conditions for enterprises are thorough policies. All tiers of government are stepping up the implementation of many specific and concrete programmes and action plans. Could you tell us more about this?
In recent years, the Government of Vietnam has made great efforts to enliven the business environment and enhance national competitiveness. Together with completing institutions and policies and quickening the Master National Programme on Public Administration Reform in 2011 - 2020, it issued and applied Resolution 19/NQ-CP on major tasks and solutions on improving the business environment and raising national competitiveness, and Resolution 35/NQ-CP dated May 16, 2016 on business support and development to 2020.

In that general context, Quang Binh province determined that bettering the investment and business environment is an urgent task in both short and long terms. It has directed closely all levels and branches to reform and upgrade administration capacity towards a modern, open and popular public administration. Based on local conditions, its objectives and development requirements, Quang Binh province is focusing on following important solutions:

- Firstly, actively mobilising and promoting domestic and foreign investment, actively approaching big investors, unlocking potential and strengths on prestigious information means and channels. Remarkably, the province is pacing up foreign and cooperative relations with many countries to attract resources to successfully achieve the target of becoming a well-developed province in the country by 2020 and bringing the Provincial Competitiveness Index (PCI) to the well-ranked group in 2017 and beyond.

- Secondly, reviewing, supplementing and amending socioeconomic development plans at provincial and local levels. Quang Binh province was approved by the Prime Minister to adjust the master plan for socioeconomic development to 2030, with a vision to 2050. At present, the Provincial People's Committee assigned the Department of Planning and Investment to sign contracts with well-reputed, experienced international consultants to figure out ground-breaking, sustainable directions and solutions to many investors. In addition, the province discloses land-use plans, assists investors to clear land for investment projects, rationalise preferential policies, calls for infrastructure investment and speed up the deployment of key projects.

- Fourthly, reforming personnel work, building a contingent of qualified, responsible and dedicated civil servants, and having innovative thinking and dynamic creativity of unit leaders; robustly building a business-serving and supporting administration. While upholding the responsibility of unit leaders in reforming and publicising administrative procedures and processes, the province has inspected administrative units to deal with civil servants breaking the rule or harassing enterprises. Provincial leaders have hosted monthly and quarterly meetings and dialogues with local enterprises and investors to learn about their emerging hardships against them and opened telephone hotlines and websites to quickly receive their opinions.

- Fifthly, effectively directing the implementation of administrative and public-service reform programmes of the Government and the Provincial People’s Committee; reviewing, simplifying and publicising administrative procedures at all levels and areas, focusing on land-use rights certification and tax policy. Provincial and local agencies will review working regimes to have appropriate rationalisation. 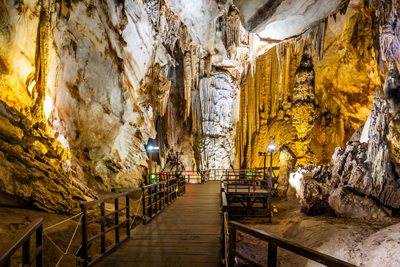 What are your opinions about carrying-out process and outcomes of the province’s public administration reform to date? On August 7, 2017, the Provincial People’s Committee issued Decision 2828/QD-UBND approving the project establishing Quang Binh Provincial Public Administrative Centre. What are the objectives of the government and aspirations of people and businesses about the process of accelerating public administration reform, improving the business environment and enhancing local competitiveness?
To shape an equitable and harmonious investment and business environment, Quang Binh province has made efforts to quicken administrative reform at all sectors and levels; closely integrate the formation of e-government with administrative procedure reform; and speed up the compilation of specialised databases and use of general software to ensure compatibility, uniformity and smooth operation. Besides, the province has raised the rate of using electronic documents among State agencies; increased the effectiveness of public services provided online; strictly adhered to the receipt, handling and delivery of opinions and petitions from citizens and businesses on the electronic information portal of the Provincial People’s Committee, and websites administered by provincial departments, branches and localities. Moreover, branches and localities have issued the set of administrative procedures and carried out one-place single-window mechanism to all fields of operation.

The province has also hosted many meetings and dialogues between provincial leaders with businesses and investors; actively reviewed and modified preferential policies in the way most beneficial for enterprises. At present, Quang Binh province is focusing on directing provincial departments, branches and localities to complete the project on construction of modern single-window administrative units and quickly bring the Quang Binh Provincial Public Administration Centre into operation.

After being put into operation, the centre will receive, direct and coordinate relevant agencies to settle administrative procedures and deliver results to citizens and organisations in one place. This is a huge step towards shaping a modern, professional, transparent, efficient and effective administration; shortening the service time; reducing administrative compliance costs; and building up the trust of enterprises investing in the province. 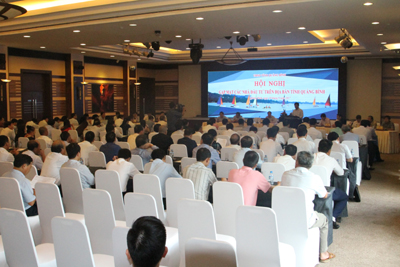 To carry out Resolution 35/NQ-CP of the Government dated May 16, 2016, the Provincial People’s Committee issued Action Plan 1212/CTr-UBND dated August 3, 2016, it announced the target of having 7,000 enterprises by 2020, including some large-scale, influential enterprises, having the private sector contribute 49- 50 per cent of GRDP and 70 per cent of total social investment. How are these targets being realised by the province?
To develop the private sector into a strong driving force for socioeconomic development, the Provincial People’s Committee has concentrated on directing and applying concrete solutions as follows:

The province has publicised development plans, projects and data in order to provide best conditions for businesses and investors to access information and investment opportunities; carried out regional plans and expand regional connectivity so as to fully tap local potential and mobilise resources for socioeconomic development to spur the private sector development.

The province has supported businesses to expand their operations and improve their performance by regularly adjusting preferential and support policies based on actual local conditions and new laws to make sure that they will receive the highest support and incentives. Recently, on July 18, 2017, the Provincial People’s Council ratified Resolution 19/2017/NQ-HDND on a number of incentive policies and investment supports in Quang Binh province, which includes many tax and land incentives and assistances, land compensation, site clearance, infrastructure construction, labour training funds. Quang Binh has also supported investors to invest in accommodation facilities and restaurants or open new flight routes. And, the province has specially supported innovative business start-ups.
The provincial government has hosted quarterly and annual meetings with investors and enterprises to learn about their emerging hardships to have best solutions and collect their opinions on new local policies. It has directed provincial departments, branches and agencies to pay no more than one inspection a year, except for cases of clear law violations.

Every year, the provincial government guides departments, branches and agencies to work out business support plans; timely honours outstanding enterprises and entrepreneurs who have contributed greatly to local socioeconomic development.

Do you have anything to share about this on the occasion that VCCI issues a publication on the province’s investment environment improvement?
The spirit and resolution of the Government in its message of building an administration that acts, facilitates development, determines to reform, highly regards enterprises, sees enterprises as driving forces for development and serves enterprises, has spread to each and every locality, level, sector and every employee. From this spirit, Quang Binh province is executing many solutions to improve the business and investment climate and actively building government that serves and supports enterprises. I believe that, with the determination of the entire political system, Quang Binh province will build up the robust confidence of investors and enterprises when they come to Quang Binh to do business.