On March 22 the Vietnam Chamber of Commerce and Industry (VCCI) and the US Agency for International Development (USAID) jointly launched the 2017 Provincial Competitiveness Index Report (2017 PCI Report).

The 2017 PCI Report is the 13th iteration and is based on responses from 12,000 enterprises, including more than 10,200 domestic private enterprises from 63 cities and provinces and nearly 1,800 foreign invested enterprises in 21 provinces in Vietnam.

The 2017 PCI Report witnessed impressive reform efforts by local governments across the country. Many governance areas have been improved in 2017 to remove obstacles for businesses. Informal charges have been on the decline, the business environment has been more equal, and the administrative procedures have been simplified.

Dr Vu Tien Loc, President and Chairman of Vietnam Chamber of Commerce and Industry, noted: “Positive improvements have been the dominant trend in Vietnam’s business environment for the past year. Provinces and cities have actively implemented the directives of the Prime Minister, learning to employ good practices and experiences from top performers in order to improve their local business environment. Important policies and guidelines by the Government have led to positive improvements, such as Resolution 19/NQ-CP on “Improving the Business Environment, Enhancing the National Competitiveness;” Resolution 35/NQ-CP on “Supporting and Developing Enterprises through 2020;” and Directive 20/CT-TTg of the Prime Minister dated May 17, 2017 on “Rectifying Inspection Activities to Prevent Redundant, Overlapping and Unnecessary Inspections for Enterprises.” 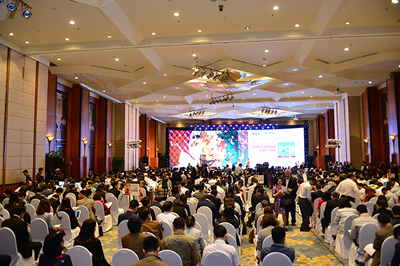 The 2017 PCI survey revealed that optimism among the private business community and foreign investors regarding their economic prospects is growing. Fifty-two percent of PCI 2017 respondents in the domestic survey said that they planned to increase the size of their operations over the next two years, the highest level since 2011, while the number of firms planning on scaling down or closing their business was extremely low at 8 percent. The share of foreign-invested enterprises (FIEs) that plan to expand their businesses in Vietnam rose to 60 percent, a level of ambition unseen since the apex of 2010.

The 2017 PCI-FDI survey offers several causes for optimism. FIEs reported significant improvements in the regulatory burden in entry procedures. The post- entry regulations for FIEs in areas such as social insurance, taxes, and labor have been eased compared to previous years. Like domestic private firms, the share of FIEs enduring harassment has been on the decline.

There is, however, much room for improvement. The business community expects to see continued reforms in the business environment in the future, particularly in the fields of taxes, customs, specialized inspections, social insurance, and firefighting and prevention. It is crucial that Vietnam have in place effective strategies and policies to enhance its labor quality, especially skilled employees that firms have currently encountered difficulties in recruiting.

US Ambassador to Vietnam Daniel Kritenbrink commented: “The PCI report has been very influential in promoting transparency and good economic governance in Vietnam, which has been vital for stimulating investment and trade opportunities in Vietnam. We look forward to continued strong economic growth and prosperity in the years ahead.”

This year’s edition features a special chapter to analyze management issues of Vietnamese private enterprises. The analyses showed that management quality is associated with better performance. Firms with good managers have higher growth rates in both employment and fixed capital investment. Firms that are able to obtain a one-point increase in management quality (on a four point scale) can expect to experience a 1.06 percent increase in average annual capital growth. Good managers also are more likely to be optimistic about future expansion plans and more involved in exporting or selling to FIEs. They are less corrupt and have the least need for corruption to succeed in Vietnam’s market as compared with poor managers.

Improving management quality is an important part of the solution to enhance the performance of domestic firms in order to increase their scale of operations and create opportunities to integrate more deeply into the global economy, thereby contributing significantly to the formation of a successful generation of competitive private firms in the international arena.