In 2017, with high determination and many ground-breaking solutions, the Party, the government and the people of Soc Trang province achieved relatively inclusive results, with many targets reached and exceeded. In an interview granted to the reporter of the Vietnam Business Forum Magazine, Chairman of Soc Trang Provincial People’s Committee, Mr Tran Van Chuyen affirmed: “This is a solid foundation and an important driving force for the continued success of the province in 2018 - the banner year that the province carries out the 5-year socioeconomic development plan (2016 - 2020) and partly realises its goal of becoming a relatively developed province in the Mekong Delta, as stated in the Resolution of the 8th Provincial Party Congress.”

If you had redrawn the socioeconomic picture of Soc Trang province in 2017, what bright colours would you have added to it?
Although the national economy was yet to escape from difficulty in 2017, the province’s socioeconomic development was still quite comprehensive thanks to the strong determination of the entire society and especially important contributions of the local business community. The gross regional domestic product (GRDP) reached VND33,307 billion. GRDP per capita was VND34 million in the year.

The local investment and business environment was significantly improved, resulting in higher investment results. In the year, 363 enterprises were founded with VND4,250 billion of investment capital, up 9.62 per cent in enterprise and 11.14 per cent in value over a year earlier. In particular, the business community made significant contributions to economic growth by paying VND1,930 billion of taxes or equivalents (accounting for 57.28 per cent of the province’s total budget revenue) and directly to the value of goods sold (making up for about 30 per cent of the province’s total value).

Cultural and social aspects also progressed. Social welfare policies, gratitude policies for people with meritorious services to the nation and support policies for the poor and ethnic minorities continued to be effectively implemented. The province created jobs for 25,579 workers, 8.85 per cent more than the set plan and 7.42 per cent more than a year earlier. Education - training, health and culture - information fields, among others, kept making good progress. Political security and social order and security were maintained.

The comprehensive results achieved in 2017 will be a solid foundation for Soc Trang to go farther in 2018 - the banner year the province executes the Resolution of the Provincial Party Congress in the 2015 - 2020 term. To realise an economic growth of 7.2 - 7.5 per cent, the province will have to fulfil many heavy tasks that require high spirit, effort and resolution of the entire political system with fundamental, effective solutions.

One major potential of Soc Trang province that draws special attention from investors is its renewable energy resources for wind power and solar power development. Could you please tell us about investment results in this field?
Soc Trang is located in the lower Mekong Delta. With a 72 km coastline, the province not only has favourable conditions for developing commercial fishing, aquaculture, marine transport and tourism, but also has ample potential and advantage for developing wind-to-power energy on a large scale. According to surveys by domestic and foreign investors, coastal areas in Soc Trang province hold great potential for wind power development thanks to its long coast and immeasurably strong winds. Based on monitoring and observation data, coastal districts of Soc Trang province, at an altitude of 60 metres, have an average wind speed of 6.2 metres per second. Thus, wind power development investment is very convenient.

To favourably engage various economic sectors to invest in wind and land resources to grow the wind power industry, further ensure national energy security and facilitate local economic restructuring, on May 6, 2014, the Ministry of Industry and Trade issued Decision 3909/QD-BCT approving the Soc Trang Wind Power Development Plan to 2020, with a vision to 2030. The plan was divided into two phases, with the first phase spanning to 2020 and the second phase stretching from 2021 to 2030. In the first phase, wind power projects will be developed in 13 locations covering 27,800 ha. The combined capacity is 1,155 MW.

Currently, Soc Trang has decided to invest in two wind power projects at a total cost of over VND2,800 billion. It is also considering granting an investment licence to the third wind power plant (in Khanh Hoa Ward, Vinh Chau Town) to Banpu Power Company of Thailand with a total investment capital of nearly VND2,000 billion. The province is calling investment capital for more wind power projects which have not been registered by any investors. We are committed to creating favourable conditions for businesses and investors from the stage of contacting, surveying and project planning to the stage of starting official operations.
As for solar power, Soc Trang is drafting the solar power planning scheme and seeking advice from provincial departments and branches and will soon submit it to the Ministry of Industry and Trade for addition to the National Solar Power Development Plan.

With a 72 km of coastline and three large estuaries flowing into the sea, Soc Trang province has significant advantages and potential for sustainable economic development in the Mekong Delta. After 10 years of enforcing Resolution 03-NQ/TU on marine and coastal economic development, what are the remarkable outcomes of Soc Trang province to this effect? How will the province implement the Resolution in the coming time?
After 10 years of Soc Trang province enforcing Resolution 03 of the Provincial Party Committee, socioeconomic development, national defence and security and political system construction in coastal areas achieved positive results. GRDP growth and GRDP per capita are higher than the provincial average. Aquaculture is developed on an expansive scale, driven by the application of advanced technologies and microbiological technologies to processing and export. Offshore fishing and coastal aquaculture account for 90 per cent of the province's aquatic output.

Coastal socioeconomic infrastructure has been invested. Environmental protection, forest development, and natural disaster prevention and control have also been of great attention. Social, cultural, education and health aspects have made great progress as well. The political system has been consolidated and strengthened, and the quality of activities has improved. Political security, social order and safety in coastal areas have been firmly maintained.

In order to further carry out Resolution 03 of the Provincial Party Committee, effectively tap coastal and marine potential and strengths, Soc Trang province has proposed five key tasks and solutions. Specifically, the province will focus on calling investment capital to develop processing industry, renewable energy industry, trade, service and tourism in a bid to accelerate local economic restructuring and socioeconomic development. It will deal well with social issues and improve people's life in island and coastal areas; develop the economy in association with the protection of national sovereignty, border and coastal security to maintain and stabilise political and social order and safety in the province. Soc Trang will protect natural resources and marine ecosystems and adapt to climate change to ensure rapid and sustainable development at sea and in coastal areas. 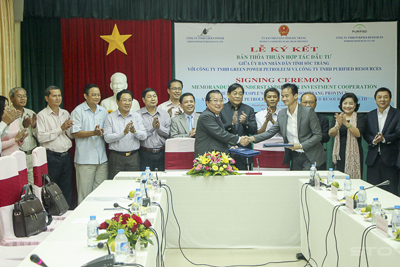 In order to achieve the objective of the economic development strategy to 2020, Soc Trang set a target of attaining an annual GRDP growth of 8 - 9 per cent and rising to become an average province in the Mekong Delta. What solutions will the province adopt for the coming time?
In order to accomplish the target, Soc Trang will focus on improving macroeconomic management performances, with a focus placed on management and utilisation of financial resources; and drastically direct the disciplined and effective implementation, management and inspection of budget revenues and expenditures. The province will increase investment in socioeconomic infrastructure development; effectively implement urban development process; gradually invest complete technical and social infrastructure construction; and concentrate on modern urban space development in harmony with national cultural identity. Consequently, Soc Trang City - the capital of Soc Trang province - will become a second-grade city and Tran De Town and Dai Ngai Town will become fourth-grade urban areas.

In addition, the province will accelerate agricultural restructuring to enhance productivity, quality and revenue along with new countryside construction; promote administrative reform, with a focus on institutional reform and administrative procedure reform; maintain political security, social order and safety; uphold Party building and strong political system; and develop human resources, especially leaders at all levels and across all sectors, to meet development requirements.
With central solutions, coupled with the strong determination of the entire political system, we believe that Soc Trang will soon rise to become an above-average province in the Mekong Delta, where people’s livelihoods will be quickly raised to new levels.