For 25 years of re-establishment (1992 - 2017), Soc Trang province has attained important achievements, created a new appearance to urban and rural areas, significantly improved the material and spiritual life of the people, and highly uplifted the position and strength of the province. In the following conversation with us, Mr Tran Van Chuyen, Chairman of the Soc Trang Provincial People’s Committee, affirmed that “The Party, the government, the armed forces and the people of Soc Trang province will make a greater effort to successfully achieve the goal of industrialisation and modernisation to become a relatively developed province in the Mekong Delta by 2020.” Hoang Lam reports.

After 25 years of re-establishment, Soc Trang province has effectively utilised and promoted available advantages and resources in the course of provincial construction and development, and achieved important socio-economic development outcomes. Would you mind introducing remarkable socio-economic development results in the past 25 years?
Since the province was re-established in 1992, the Party, the government and the people of Soc Trang province have made great efforts for stronger development and attained important achievements. These achievements will be clearly illustrated with the three following remarkable results:

Firstly, the economy has been constantly grown and the economic structure has shifted in a positive direction. For the past 25 years, the average annual economic growth rate has been over 10 per cent. Gross domestic product (GDP) in 2016 was 11 times higher than that in 1992. The economic structure has shifted towards a desired pattern, with industry and service holding greater shares.

Secondly, all economic sectors have developed rapidly. In agriculture, rice output has increased over time. In 1992, the rice output was less than one million tonnes but it has now exceeded two million tonnes a year, making Soc Trang one of five provinces with the biggest rice output in the Mekong Delta and the whole country as well. Livestock and poultry husbandry has been strongly expanded, especially with the strong growth of cow herds in recent years. As for fishery, the province has witnessed a strong growth in all fields in the past 25 years. In 2016, aquatic production exceeded 237,000 tonnes, eight times that of 1992 - an abundant source for aquatic processing industry. As for industry, the value of industrial production in 2016 soared 24 times over 1992, representing the average yearly growth of over 14 per cent. In the field of trade, both domestic and foreign trade has been promoted. The market system has been expanded from urban to rural areas (with 133 markets). The retail revenue in 2016 jumped 50 folds over 1992. The export value has been on the sharp rise, reaching US$630 million in 2016, an increase of 25 times over 2015.

Thirdly, the material and spiritual life of the people has been markedly improved. Over the past years (especially in the 2001 - 2011 period), the province has taken many measures to focus on hunger eradication and poverty reduction, and gradually improve people’s living standards. When it was re-established in 1992, the poverty rate was 36 per cent, with 28 per cent living in hunger. The poverty rate has now decreased to 15 per cent (based on multi-dimensional poverty standards). Social security policies have been effectively and timely implemented. The school network has been rationally. The province has completed the goal of universalising the preschool education, primary education and secondary education. The medical network has been consolidated and perfected. At the end of 2016, the province operated 700-bed Soc Trang General Hospital furnished with modern equipment to meet healthcare needs of people. 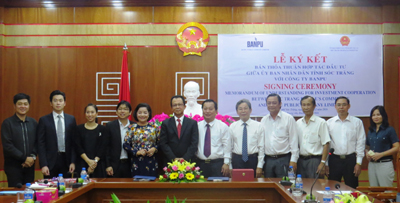 Facing such advantages and challenges, to capture every opportunity in the process of international integration, Soc Trang province will effectively concentrate on carrying out its economic restructuring scheme and changing the development pattern by enhancing economic quality, performance and competitiveness and accelerating the implementation of three strategic breakthroughs: Administrative reform, synchronous infrastructure construction, and human resource development.

In addition, the province will pay due attention to restructuring investment, with a focus on public investment. It will create favourable conditions and conducive environment for all economic sectors to develop. It will efficiently use State capital sources; engage the private sector to invest in production and business development; and build essential infrastructure systems for quicker socio-economic development. At the same time, it is essential to improve the performance of foreign affairs, and actively advance its international integration to capitalise on external resources and expand markets.

25 years after re-establishment, the face and standing of Soc Trang in the Mekong Delta has been improved. What areas will Soc Trang province prioritise in for faster and stronger development in the future?
To make Soc Trang grow faster and more strongly in the future, the province needs supports from the central government for special mechanisms and policies. Specifically, the central government will soon offer funds to help the province to develop traffic infrastructure such as bridges, roads and sea embankments. At the same time, key traffic works like Dai Ngai Bridge and National Highway 60 should be built soon to link Ben Tre, Tra Vinh, Soc Trang, Bac Lieu and Ca Mau provinces, thus shortening the travel distance between the eastern coastal provinces of the Mekong Delta with Ho Chi Minh City to promote regional integration and promoting economic development, ensuring national defence, preventing tides and mitigating change climate impacts.