Khanh Hoa is a southern central coast province that faces the vast ocean. It has a lot of famous historical and cultural relics and picturesque landscapes, and has a well-trained workforce, with many graduating from university level or higher. In recent years, the province has mobilised many domestic and foreign funds for its three key economic areas (Cam Ranh Bay, Van Phong Economic Zone and Nha Trang City). Khanh Hoa has ample opportunities to attract domestic and foreign investors for development cooperation. Vietnam Business Forum Magazine has an interview with Mr Le Duc Vinh, Chairman of Khanh Hoa Provincial People’s Committee, to better understand local advantages. Han Luong reports.

In the past five years, Khanh Hoa has witnessed marked changes, especially in local socioeconomic infrastructure. Could you please tell us more about this?
At the end of 2017, Typhoon Damrey caused serious damage to the province. But with the ultimate determination, Khanh Hoa continued to develop and achieved important results in 2016-2017. Its gross regional domestic product (GRDP) expanded an average of 8.6 per cent a year and GRDP per capita increased 7.8 per cent on average. The economic pattern was restructured toward the right track, with the share of services, industry and construction making up 80.75 per cent, and the share of agriculture, forestry and fishery accounting for 9.76 per cent. The tourism industry continued to thrive, expanding annually by 20-30 per cent on average. The province’s tourism revenue reached VND17,000 billion in 2017, up 30.8 per cent against 2016. The commodity export value was US$2.43 billion in 2016 - 2017, accounting for 26 per cent of the export value of the Southern Central Coast and the Central Highlands, just after Da Nang City.

Total social investment capital was over VND68.7 trillion in 2016 - 2017, rising an average of 15 per cent a year. Important traffic works like Nha Trang - Dien Khanh (Cao Ba Quat - Cau Lung section) and Phong Chau Road were basically completed and put into use. In addition, Khanh Hoa is actively speeding up the construction of a number of other major projects such as Runway No. 2 and T2 Terminal at Cam Ranh International Airport; Nha Trang urban, commercial, service, financial and tourism centre; and Bac Van Phong Special Administrative - Economic Zone construction project, submitted to the Government for approval. Besides, Khanh Hoa is actively promoting and strengthening deep, practical cooperation with foreign provinces in Laos, Cambodia, France, South Korea, Russia and others.

Could you describe the solutions and efforts that Khanh Hoa province has taken to develop amid growing market competition, to sustain economic development growth and ensure social security?
The Provincial People’s Committee issued an action plan for implementation of the Resolution of the 17th Provincial Party Congress. The province also effectively carried out government mechanisms and policies to support enterprises to tackle difficulties in industrial production and services. Furthermore, we also helped local people borrow money for commercial fishing, aquaculture, cattle and poultry husbandry. This made a significant contribution to increasing agricultural products and accelerating the development of agricultural and processing companies. Moreover, the province has strengthened cooperation with credit institutions to seek measures to assist businesses to access loans for business operations, create jobs for people and increase revenue for the State Budget. At the same time, it stepped up exports and convinced manufacturing companies and consumers to restrict the use of imported goods and use more locally made goods. 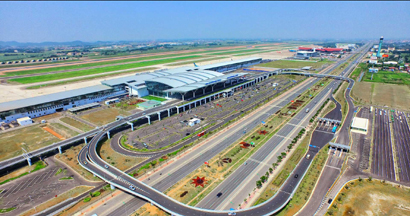 In 2017, Khanh Hoa's Provincial Competitiveness Index (PCI) ranking increased one place over a year earlier, to stand 23rd out of 63 provinces and cities in the country, and the Public Administration Reform Index (PAR Index) climbed six places against 2016, ranking sixth out of 63 provinces and cities. How did the province achieve such high rankings?
Public administration reform (PAR) is an institutional framework for enhancing the efficiency and effectiveness of the State economy. In recent years, PAR has always been a central task of the provincial government. Most departments, sectors and localities have firmly engaged in PAR, and promptly issued plans and documents to direct and administer in all fields. The modern single-window administrative mechanism was expanded and accelerated at all three levels. Applying information technology and ISO 9001:2008 quality management system was also accelerated.

Besides, with the effective implementation of Resolution 35/NQ-CP on business support and development to 2020, the Khanh Hoa Provincial People’s Committee has directed local authorities to review all administrative procedures relating to enterprises and investors to get rid of unnecessary ones, particularly those concerning land, business registration, investment certification and construction permits. Local authorities have organised many meetings to answer questions about administrative procedures raised by enterprises, while affirming maximum support for business development (in 2016 - 2017, the province held four business dialogue conferences).

Could you please describe the major socioeconomic development objectives and orientations of Khanh Hoa province for the coming years?
In 2018, Khanh Hoa province will continue to effectively implement government mechanisms and policies to further perfect the socialist-oriented market economy and make sure that the business and investment environment is favourable and fair. Particularly, the province always takes human resources as a core factor in all processes. In addition to raising the performance of external relations and international integration, Khanh Hoa province aims to become a first-grade centrally run urban area by 2020, basically meets the standard for an economic, tourism, scientific and technological centre, a human resources training centre for marine economy, tourism economy and public healthcare in the Southern Central Coast, the Central Highlands and the whole country.

Do you have any message to send to visitors and businesses interested in the investment and business environment in Khanh Hoa province?
With the leading principle “Khanh Hoa - a place to start success for investors”, the province warmly welcomes investors who are serious about developing, loving and protecting Nha Trang - Khanh Hoa. The province is always ready to welcome domestic and foreign visitors coming here to seek opportunities in business investment and economic development cooperation. In particular, we will not sit to wait for investors to come, but seek them, specifically for prioritised industries and fields. To date, business support is always a “plus point” and a priority task in the leadership, direction and administration of the provincial government. We believe that by determining right directions, supported by a lot of groundbreaking policies and solutions, the province will also create a dynamic, effective and energetic economy for a new proud development stage in the present and in the future.