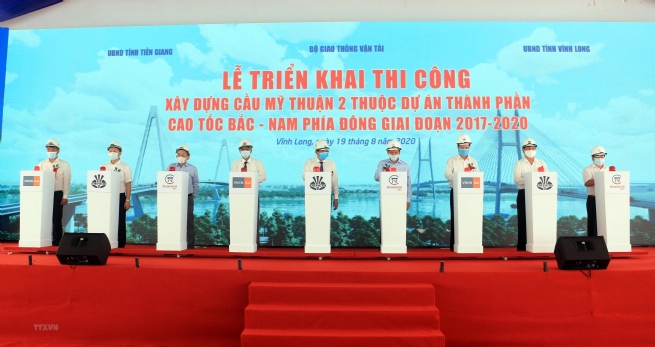 Mr. Tran Quoc Hop, Director of the Vinh Long Transport Department, said that before 2015, the local transport infrastructure was still quite weak, especially the rural road system. Inter-village roads were mainly concreted with an average width of 2m, mainly for 2-wheel vehicles. Provincial and district roads were better and asphalted.

Carrying out the Resolution of the 10th Provincial Party Congress, in the 2015 - 2020 period, the transport sector made efforts to perfect planning and balanced the use of different funding sources (provincial budget, central budget, World Bank’s fund and public fund) to build and upgrade provincial roads, district roads and rural roads to planned standards. In the past five years, the total fund for traffic construction in the province was estimated at VND3,500 billion, resulting in considerable progress of infrastructure construction. In the 2015 - 2020 period, the province built more than 200km of asphalted district roads and inter-village roads with a surface of at least 3.5m wide, capable of supporting vehicles of 5 tons. Up to now, roads to administrative centers of all communes in the province can support passenger cars. 50 out of 87 communes met transport criteria.

In this period, Vinh Long province built and upgraded about 100km of provincial roads; of which 50km met fourth-grade standards (Provincial Road 902 and Provincial Road 908). In addition, the province built and upgraded many urban roads, such as the road from National Highway 53 to extended Vo Van Kiet Road, the road to Vinh Long Park, Trung Nu Vuong Street, Con Chim Bridge and Ngang Bridge. The traffic infrastructure system was increasingly smoothened to facilitate travel, trade and socioeconomic development, and create a premise to attract investors to Vinh Long province to carry out projects.

However, the province currently has existing shortcomings such as low-capacity district roads. Especially, bridges are not strong enough to support heavy commodity transportation. In addition, about 80% of existing provincial roads are fourth-grade, with small surface width and limited load capacity. Existing road surfaces are mainly concreted with short lifespan. Maintenance and repair costs are high while the province cannot afford it. To overcome these shortcomings, build a synchronous, modern and smooth infrastructure network and meet socioeconomic development requirements, in the 2020 - 2025 period, the transport sector of Vinh Long province will focus on two main goals: Upgrading and completing the provincial road system to at least fourth-grade class with a surface width of 7m; and constructing rural transport infrastructure, especially completing the inter-village road system in 37 communes that have not met traffic criteria.

In the near future, the Department of Transport of Vinh Long province will carry out traffic projects connecting with Dong Thap province such as: the road from Provincial Road 908 to Tan Phu commune; and Phu Quoi - Thanh Quoi Road to Chau Thanh district. Besides, there are projects invested by the central government of Vietnam such as My Thuan 2 Bridge, My Thuan - Can Tho Highway. These projects are expected to be completed in 2020 - 2025 and stimulate the formation of a complete transport network facilitating economic, cultural and social growth in Vinh Long province in particular and in the southwest region in general.