Ha Tinh province started implementing the New Rural Development Program with a low starting point. After more than 12 years of ongoing construction, the province has greatly improved the material and spiritual life of the people.

Ha Tinh province has been selected by the central government as an example of building new-style rural areas in the 2021 - 2025 period.

Bright picture of the countryside

The National Target Program for New Rural Development has produced many important results, helped promote socioeconomic development, ensured national defense and security, and built a strong political system. The countryside's face has brightened, and the material and spiritual life of rural people has been improved. In 2021, the income per capita in rural areas of Ha Tinh province reached VND36.6 million, an increase of 4.33 times over 2010, the poverty rate decreased to 3.03%, and the quality of healthcare and education progressed markedly. The rural landscape and environment have changed positively; public awareness and thinking have been increasingly enhanced. The political system has been consolidated and the capacity for effective leadership, direction and organization has increasingly grown. 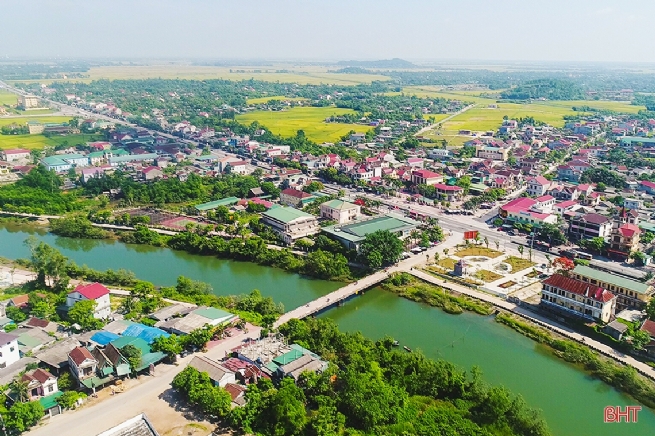 Ha Tinh defined that the New Rural Development Program is a central task of the political system, and must become a great campaign to change the face of the countryside and improve the material and spiritual life of the people. With creative ways, the drastic and synchronous participation of the political system and the consensus of the people, Ha Tinh has achieved important results.

Coming to Ha Tinh rural areas today, wherever we are, we will be immersed in peaceful, prosperous and constantly changing villages; see urbanized streets in the village with spacious and modern electric lights, roads, schools, traffic stations and green blooming spaces in four seasons. At night, electricity lights up all streets and living spaces, evoking the truest feelings about the countryside. That is clearly illustrated, first of all, in the strong rural economic transformation toward industrialization and modernization. Localities have uniformly converted and accumulated land and opened ways for production development. The agricultural production force shifted sharply from manual labor to mechanization and electrification. Agricultural labor productivity indicators have picked up rapidly.

Besides a beautiful outlook and prosperous economy, the rural cultural life in Ha Tinh province is still imbued with a locally distinctive identity. Rural security is maintained. The environmental landscape is greener, cleaner, and nicer.

Ha Tinh province is advancing a new rural construction movement with many dynamic, drastic and effective new methods. Nghi Xuan district is trying to become a model rural district in terms of culture and tourism. Vu Quang district and Huong Son district are endeavoring to consolidate and improve higher criteria. Ky Anh town and Loc Ha district have basically completed new rural development criteria, expected to finish them in 2022. Ky Anh district and Huong Khe district, with direct guidance and practical support from the province, are making their best to meet new rural development standards in 2023.

However, the new rural development movement in Ha Tinh province has exposed many limitations. There is a big question that needs to be answered: How certified localities must really be typical of agricultural and rural development, have strong economic development, and bring progress to all aspects of people's lives. Then, the province clearly defines its goal to 2025 of achieving new rural development standards, characterized by quality, effect and sustainability, to lay the foundation for development to 2030 (Centennial celebration of Party founding) and to 2045 (100 years after national founding).

To meet that requirement, the province will need to have policies to support farmers to access technology, introduce machines to every stage of production, re-allocate labor and expand professions to realize the goal that each commune will have at least one well-branded key product. The agricultural economy is largely associated with land, so it is necessary to keep a close eye on labor sources and land demand and move towards land consolidation, by means of transferring use rights, leasing, or joint stock company, to pave the way for large-scale commercial production.