The presence of VinGroup and Nguyen Kim, Phong Dien Industrial Zone, and newly established air routes between Hue and Da Lat, and between Hue and Thailand have proved appeal of Thua Thien Hue province in an effort to improve the business investment to attract investment. To learn more about the results that the province has achieved over the time, Vietnam Business Forum interviewed Mr Nguyen Van Cao, Chairman of Thua Thien Hue Provincial People’s Committee. Thuy Vu reports.

The economy growth is maintained steadily at 9 percent on average per year. The GDP of the province was estimated at US$1,900 in 2015, twice compared to 2010. The economic structure shifted towards positively; the proportion of industry and construction has increased from 33.7 percent (2010) to 34.7 percent (2015); services increased from 51.3 percent to 55.7 percent; and the agriculture, forestry and fisheries dropped from 15.0 percent to 9.6 percent.

Investment activity of the province is also more dynamic. Up to date, the province has more than 300 domestic and foreign investment projects with a registered capital of more than VND100 trillion. The infrastructure for tourism has developed rapidly. Many new word-class resorts has went into operation, such as Laguna Resort of Banyan Tree Group; Tam Giang Tourist Area of Phu Vang; Vedana Lagoon of Phu Loc; and other commercial centres of Nguyen Kim Group and Vincom are under construction, contributing to diversification of tourism products in the province. Phu Bai International Airport was upgraded to a capacity of 1.5 million passengers per year and opened for two flights between Hue and Bangkok (Thailand) and between Hue and Da Lat. International deepwater seaport of Chan May has been expanded to welcome large vessels and cruise ships of over 5,000 customers, opening more opportunities for exchanges and deepening global integration of Vietnam. 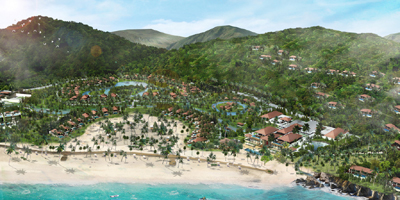 To further improve the business and investment environments as well as effectively implement Resolution 19/NQ-CP dated March 12, /2015, what will Thua Thien Hue do to remove "bottlenecks" above?
To implement Resolution 19/NQ-CP dated March 12, 2015 of the Government, Thua Thien Hue has promoted specific activities, drastically improving the business environment and enhancing the competitiveness of the province, which leads to many positive results. However, many restrictions of land clearance compensation has slowed down the progress of major infrastructure projects, particularly Highway 1A, Phu Gia Tunnel, and Phuoc Tuong and affected the progress of the investment environment of the province.

Recognising this problem in recent years, the province has focused on specific measures as follows:

First, the PPC has drafted a plan No. 90/KH- UBND dated August 6, 2015 in order to improve the business environment and enhance the competitiveness under Resolution No.19/NQ-CP. This helps maintain a good ranking of the PIC of the province. Besides, the provinces will propose specific solutions being implemented uniformly in all departments and localities to promote the reform of administrative procedures, shortening the processing, simplifying the procedures, reducing time and expenses for implementation of administrative procedures; and ensuring openness, transparency and accountability of the units.

Second, the Provincial People’s Committee (PPC) has issued Decision No.927/QD- UBND dated March 15, 2015 on setting an Advisory Council to resolve problems in the implementation of compensation and arrange the resettlement of the households. The members of the Advisory Council include the leaders of departments, agencies and localities where the project is implemented.

Third, the PPC accelerates the operation of the Development Investment and Credit Guarantee Fund to give credits for the SMEs to implement the investment projects and socio-economic activities of the province.

Fifth, the PPC boosts up the investment promotion activities by calling for investors with high capacity and strong experiences to invest in major infrastructure projects.

Besides the above solutions, the current legal framework is related to land, investment, and construction, such as the Land Law (2013), Construction Law (2014) and the Investment Law (2014) and other written documents as an important basis to overcome the difficulties.

As the highest leader of the PPC, what commitments will you make for the investors and the business community who will be investing and trading in Thua Thien Hue?
Hue has more local distinct advantages for economic development. However, recently, due to many subjective and objective causes, its potential has not been exploited and promoted properly to promote economic development and investment. Therefore, it's necessary to build up a close cooperation between the government, the business community and the investors.

On the side of the government, as the Chairman of Thua Thien Hue People’s Committee, I pledged to make a breakthrough in management and development mindset of the province.

First, the province will drastically implement the administrative reform and improve the business environment, especially in the fields of tax collection, customs, land, construction, and business registration. Besides, the province will provide public services through electronic networks; currently, Thua Thien Hue is first ranked for the largest number of the businesses registering tax and customs, facilitating the authorities, organizations, individuals and the business community easies to track database. The province also maintains online dialogues of "Sharing and Solving", held periodically for every two months among provincial leaders of the departments, the business community and individuals to exchange and promptly remove difficulties arise. The province is trying to improve the system to help ensure that all the administrative procedures will be handled promptly.

Besides, the PPC has established an inter-agency working group, regularly working with the businesses and the investors to support for policy making processes to quickly remove the difficulties and problems of the businesses. They often disclose information relating to the planning processes of the province to help the businesses updated about policies on land, construction, socio- economy and as well as list of investment the province is calling for. The province also completes the infrastructure to call for new investment in industrial zones and economic zones like Chan May, Lang Co, Hue City and Bach Ma ecotourism zone.

To the business community and investors, we welcome all ideas, spirits and investment of the investors and the businesses to help our province develop the economy and society, contributing to the development of the province. This will make the policies and directions of the province more effective and feasible, creating premise for the investors and the businesses to perform efficiently, creating a sustainable socio- economic development.