British University Vietnam (BUV) is an international university, with a campus in Hanoi and a new campus located in Ecopark Township, Hung Yen province. This campus is a sizeable investment project, coming in at over $70 million US dollars in total. Vietnam Business Forum Magazine had an exclusive interview with the General Director of BUV, Mr. Jesse Boone, and The Dean of the University, Mr. Chris Jeffery.
Why did BUV choose to locate its investment project in Hung Yen?
Jesse Boone, General Director: The first thing is that Hung Yen has a favourable geographic location, lying close to Hanoi, and with good infrastructure in terms of travel. Aside from that though, Hung Yen also has a strong educational tradition.
One of the other really important things to us is that Hung Yen province shares the same vision; that investing in education is really investing in the future. The first phase of this project has a total investment of more than $25 million USD, and that’s expected to be completed and put into operation in 2017. At that time we’ll have a population of over 2,000 students. Eventually though we’ll have capacity for 7,000 students, so there’s a clear commitment to the future there. Hung Yen province’s authorities recognise and value this too, and that’s why we’ve received a lot of praise for what we’re doing.
Another factor is that as we now know, a 21st Century university can’t just be a classroom, a teacher, and a blackboard. Today students need to learn by experience and they need space to work, think, and create. In Hung Yen we have the space to build a diverse and comprehensive educational environment for young students to learn and develop.
What are BUV’s aspirations and objectives for this project?
Chris Jeffery, Dean: We hope to build a symbol of the UK and Vietnam’s cooperative partnership in education, by creating a world-class higher education environment. We want to enable Vietnamese students to obtain international diplomas without having to study outside the country.
The size of this investment, at $70 million USD, will provide us with a university that has the best facilities, British degree programmes, elite lecturers and researchers, and of course, the best students. We hope that it will become the best university to study at and will help train highly qualified workers for Vietnam’s economy and its future development on the world stage.
We truly believe that this project will help define the partnership, and friendship, between Vietnam and the United Kingdom, and Hung Yen province is a part of this journey.
How have you found the support of Hung Yen province’s authorities on this project?
Jesse Boone, General Director: It’s been very good. We’ve received a lot of extremely valuable support from Hung Yen province. In terms of the Peoples’ Committee, a number of high-ranking leaders, such as the former Chairman Doan The Cuong, incumbent Chairmen Nguyen Van Phong, and Vice Chairmen Nguyen Duy Hung, have closely followed and supported us from the very beginning. A number of provincial departments and branches also assisted us, for example the Department of Planning and Investment worked with us with investment licensing processes, while the Department of Construction worked with us with the construction permits.
Hung Yen province’s authorities are really very open. They regularly attend our events at Ecopark Campus, and this openness to investors has drawn attention from other international companies, such as the University of Tokyo Vietnam, or Vietcombank, who are opening a Training Centre in Ecopark.
We find that Hung Yen’s leaders really want to promote educational development, and they’re looking to become an educational centre of the North Vietnam region, so again, we have a shared goal for the future. 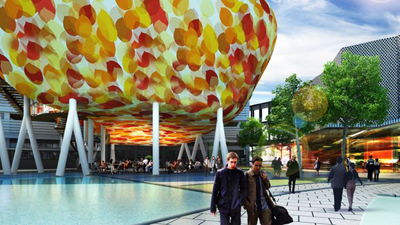 What are BUV’s opinions about the investment environment in Hung Yen province?
Jesse Boone, General Director: Well we believe that, like any other activities, attracting investment requires a proactive approach. A lot of localities are competing with each other in the provincial competitiveness index (PCI) and in investment attraction. This has promoted the central and provincial governments to work together, to turn Vietnam into a magnet for foreign investment. This takes place in the wider regional context too, with Vietnam competing against other nearby countries like Myanmar, Thailand, Cambodia, and Laos.
Hung Yen is close to Hanoi, and infrastructure has improved a lot. When we first came to Hung Yen four years ago, the transport system was challenging, but it’s developed quickly and now is much better. It now takes less than 30 minutes to drive from Hanoi to our campus. A big part of this success is down to planning, and Ecopark has done a great job in creating this space which is really an entire community. This has attracted many more investors, like the Japanese Hospital and Vietcombank, who I mentioned before. So this planning, alignment of visions for the future, and the development in transport links are some of the reasons that we chose Hung Yen as the place to build our future.
Finally, will Brexit have any impact on BUV in Vietnam?
Chris Jeffery, Dean: Brexit will have a little impact on the market at large, but in the long term it won’t have much of an effect. Although the United Kingdom is leaving or about to leave the European Union, the country still has strong diplomatic relations in all of these countries and more, especially with Asia and South East Asia, so Brexit has no impact on our investment commitments in Hung Yen province.