Quang Ngai Wakes up and Stands up Strong

With the concerted effort of the Party, the government and people, 27 years after re-establishment, Quang Ngai province has made great changes in all fields of production and life, and confidently established a solid position in the region. Carrying out socioeconomic development tasks in 2015-2020, with right policies of the provincial government, supports from the people and enthusiasm of the business community, Quang Ngai is determined to take firm steps to stand up vigorously and energetically to integrate effectively into the region and the world. The interview with Chairman of the Provincial People's Committee - Mr Tran Ngoc Thang - also partly shows the great determination of Quang Ngai. Hoang Lam reports.

To promote its achievements, Quang Ngai defined 2017 as the year of “renovating leadership and administration; improving the investment, business and start-up environment” with the general objective of “Enhancing the leadership and combative capacity of the Party; building a lean, effective political system; rearranging and improving the capacity and quality of public non-business units; socialising and mobilising social resources for development investment; raising competitiveness and boosting economic growth; stimulating innovation, creativity and entrepreneurship; managing and utilising natural resources effectively and protecting the environment.” The province targeted to outdo all plans: GRDP per capita of VND51.8 million, total budget revenue of VND12,796.3 billion, urbanisation rate of 19.22 per cent, and poverty reduction of 1.85 per cent, with mountainous areas seeing a drop of 5.54 per cent. 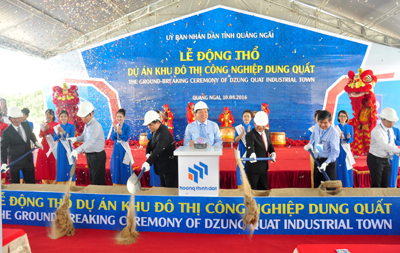 In addition to supporting investors to carry out their projects on schedule, Quang Ngai will also actively attract more new investors, with a focus placed on projects that create high added value, develop industries in rural areas, and develop industries serving agriculture and rural areas. The province will gradually form and develop supporting industries, meet input demands and increase localisation rate in industrial production. The province will develop the industry in harmony with the service sector, the agricultural sector and urban system, boost industrial growth by developing technologies and high-quality human resources, effectively exploit investment and development resources, and create a solid foundation to become a modern industrial province.

Quang Ngai defined 2017 as the year of “renovating leadership and administration; improving the investment, business and start-up environment”. How will the province support investors to overcome existing hardships?
Apart from issuing corporate support policies such as Decision 45/2015/QD-UBND dated August 31, 2015 and Decision 36/2016/QD-UBND dated September 27, 2016, as the head of the Provincial People’s Committee, I vow to all investors that Quang Ngai always regards the success of investors as the province's success. The leadership of Quang Ngai province will, at all times, accompany investors; direct, facilitate and support investors when they are in the province. The province will create favourable conditions for investors by offering preferential policies on land lease, infrastructure, administrative procedures, training support and recruitment; immediately tackle difficulties and problems against investors; ensure order and safety, to create a conducive and open investment and business environment, and sharpen local competitiveness, thus gradually turning Quang Ngai province into an attractive destination for domestic and foreign investors.

What do you think about the role of Ly Son Island in the province’s socioeconomic development? What solutions will the province take to develop the strong economy, and solid national defence and security of Ly Son Island?
Ly Son is a frontier island of the country that plays an important role in national security and defence. Ly Son Island lies on the sea route from the north to the south and on the path to the East Sea for the central economic region via Dung Quat Border Gate. With this position, Ly Son is an administrative unit critical to the country’s marine economic development strategy together with protection of territorial waters and sovereignty of the country. Ly Son island district has a very important role and position plus huge potential in economic development and national defence and security. The island is also part of the master plan for marine economic development of Vietnam to 2020 and the master plan for master socioeconomic development of the Central Coast of Vietnam to 2020 approved by the Prime Minister in Decision 568/QD-TTg dated April 28, 2010, Decision 61/2008/QD-TTg dated May 9, 2008, and Decision 1995/2014/QD-TTg dated November 4, 2014.

To plan and build Ly Son into a tourist island with a strong economic capacity, a strong national security in defence foundation - the condition precedent for protection of the sea and the islands, the Resolution of the 19th Provincial Party Congress defined specific solutions: quickly restructuring the economy towards increasing the share of tourism, fishing and aquaculture; rapidly increasing the forest area; stepping up environmental protection; saving fresh water; improving service quality; developing community tourism; carrying out marine reserves; building Ben Dinh Port; compiling documents to submit to the Government for recognition of Ly Son Island as a special national cultural heritage; raising the community awareness of burial customs and practices to protect the environment and save land for tourism and service development.