Carrying out the “Year of Business” and the “Year of Administrative Order and Discipline” in 2017, Thua Thien Hue province has adopted many solutions and activities to accelerate administrative procedure reform, raise the spirit and sense of responsibility of civil servants, invest in essential infrastructure and remove difficulties for enterprises, among other things, in a bid to better mobilise investment resources in infrastructure for production, economic development, environmental protection and social security guarantee. The Vietnam Business Forum Magazine has an interview with Nguyen Van Cao, Chairman of the Thua Thien Hue Provincial People’s Committee, on this issue. Ngo Khuyen reports.

While speeding up the enforcement of Resolution 35/NQ-CP dated May 16, 2016, of the Government on business support and development to 2020, Thua Thien Hue province also defined and carried out activities in the “Year of Business” in 2016. How has this motivated business environment improvement and business development?
In response to central guidelines, the Provincial Party Committee, the Provincial People’s Council and the Provincial People’s Committee promulgated the Action Plan 103/KH-UBND dated June 28, 2016 on the implementation of Resolution 19-2016/NQ-CP of the Government dated April 28, 2016; the Action Plan 114/KH-UBND dated July 29, 2016 in implementation of Resolution 35/NQ-CP of the Government dated May 16, 2016; and earlier the Action Plan 145/KH-UBND dated December 30, 2015 on activities in the “Year of Thua Thien Hue Business 2016.” This showed the province’s active and positive responses to new requirements and tasks to improve the investment and business environment in the 2016 - 2020 period.

New reforms in investment attraction and positive changes in morale and attitudes of civil servants have made long strides in investment and business environment improvement. As a result, in 2016, the province had 609 newly established enterprises, the highest in five years, bringing the total number of active enterprises to 6,600. Also in the year, the province issued investment certificates to 36 domestic direct projects and 12 foreign direct investment projects. It also caught the interest of big domestic corporations like Vingroup, Bitexco, BRG and Viettravel as well as foreign investors like Hilton, Amata, Banchak, Banpu and Kaiokai. 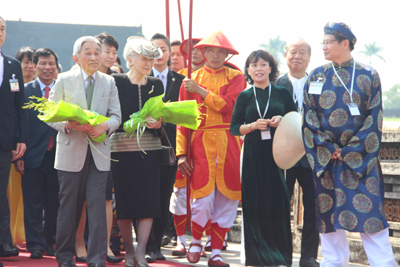 To achieve the above objectives, the province has carried out consistent directions and solutions, focusing on the following tasks:

(1) Seriously carrying out Resolution 02-NQ/TU dated July 20, 2016 of the Provincial Party Committee on promoting public administration reform, raising the effectiveness and performance of State apparatus in Thua Thien Hue province in the 2016 - 2020 period. The Provincial People’s Committee has stepped up the review of administrative procedures to reduce the service time.

(2) Focusing on clearing difficulties and obstacles, speeding up the investment disbursement for key projects in tandem with strict management of capital transfer and resolute revocation of sluggish projects. The Provincial People’s Committee will soon issue priority policies to support reputable and potential investors and large projects to create momentum for long-term economic development.

(4) Focusing on raising service quality and exploiting tourist potential; quickening the socialised conservation, operation and promotion of Hue Monuments and world cultural heritages recognised by UNESCO. The province will develop and implement plans to revise the tourism space in Hue City.

(5) Further investing in building essential infrastructure for industrial zones and launching business start-up and support programmes, creating conditions for the formation of larger enterprises to lead the local business community. 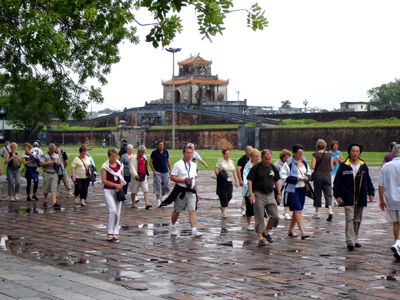 1. Public administration reform facilitates businesses:
- Speeding up the simplicity of administrative procedures, reducing compliance costs for administrative procedures in all fields.
- Operating the Thua Thien Hue Public Service Portal, allowing enterprises to perform administrative procedures online: Each enterprise shall be granted one electronic card accessible to all State policy updates and allowed to file electronic administrative documents instead of hard copies.
- The Provincial People’s Committee also approved the establishment of the Provincial Public Administrative Centre and will start operation in mid-late 2017.
- Maintaining bi-monthly business meetings to provide specific action plans, expanding information channels of the Department of Planning and Investment on the Facebook social network to update information, receive and respond to recommendations reflected by individuals and businesses.

2. Creating a favourable environment, supporting enterprises to start up a business, renovate and upgrade technology.

5. Protecting legitimate rights and interests of the business
- Issuing Decision 93/2016/QD-UBND dated December 30, 2016 on regulation on coordination among functional business agencies in enterprise management after registration of establishment.
- The provincial inspectorate issued a regulation on coordination between the Provincial Inspectorate with the Department of Planning and Investment, the Department of Finance, the Provincial Taxation Department, the Provincial State Treasury and the State Bank of Vietnam - Thua Thien Hue on dealing with economic offences.

6. Supporting and attracting investors
- Drafting a handbook on order and procedures of implementation, monitoring and management of non-State-funded investment and construction projects in accordance with Decision 26/2016/QD-UBND of the Provincial People’s Committee dated April 25, 2016.
- Issuing a list of investment attraction projects in Thua Thien Hue province for the 2017 - 2018 period, with an eye to 2020, in accordance with Decision 942/QD-UBND dated May 8, 2017.
- Issuing investment preference and support policies under Decision 19/2017/QD-UBND dated April 21, 2017.