By bringing into full play the advantages of a dynamic quadrilateral in the Mekong Delta region, An Giang has continuously gained remarkable achievements in socio-economic development and has become a "bright spot" of the socio-economic development of the South West region. "Backed with the current momentum, I am confident that An Giang will continue to obtain greater achievements, confidently boost industrialisation, modernisation and international economic integration," said Mr Vuong Binh Thanh, Chairman of the An Giang Provincial People's Committee. Hoang Lam reports.

Would you please tell us how the province has tapped the local great potential for agriculture, trade and tourism development?
An Giang is only 190 km from Ho Chi Minh City, 120 km from Phnom Penh, capital city of Cambodia. It is the trade gateway with ASEAN countries such as Cambodia, Laos and Thailand. The province has a waterway and road infrastructure with two national highways 91 and 80 connecting from the East to the West. Both the Tien and Hau rivers flow through An Giang into the East Sea. In addition, the province has My Thoi Port belonging to the Vietnam and international seaport system, located 50 km from Can Tho airport and 190 km from Tan Son Nhat airport.

Besides advantage of geographical position, An Giang also has great potential for economic development with 250,000 hectares of rice cultivation; 38,000 hectares of vegetables. The province has a large area of water surface which is favourable for the development of aquaculture towards high technology. In addition, An Giang owns abundant advantages in developing trade, service and tourism. The province has defined tourism as a key economic sector of the province. 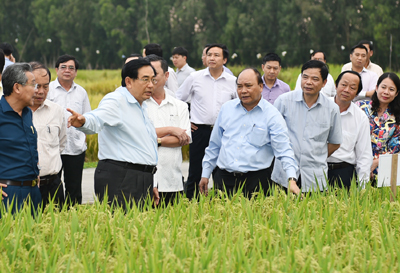 How has the province strengthened regional linkage to fully tap internal and external resources?
An Giang has great potential to boost linkage with other provinces in and outside the economic zone such as linking local markets, uniting enterprises in a new production model; prioritising the development of local products with value added chains such as rice, fish, vegetables (main products), edible mushrooms - medicinal mushrooms, cattle and prawns (potential products). In addition, An Giang has cooperated with other provinces in the region in some areas such as traffic, education, culture, tourism and health care.

For linkage in the Mekong Delta, in implementation of Decision 593/QD-TTg of the Prime Minister promulgating regulation on the linkage on socio-economic development in the Mekong Delta in 2016-2020, the People's Committee of An Giang province has sent Dispatch 790/UBND-TH dated June 9, 2016 to the Ministry of Planning and Investment (MPI ) proposing some contents to implement this regulation as follows: (1) Determine and implement the list of the linking programmes and projects in the locality. (2) Take initiative in balancing the capital under the management of linking programmes and projects in the locality.

In addition, An Giang is located in Long Xuyen Quadrangle sub-region, together with Kien Giang, Can Tho and part of Hau Giang province – among the largest granaries of the country. Implementing the guidance of Deputy Prime Minister Vuong Dinh Hue on building the project "Linking sustainable development of Long Xuyen quadrangle" at Announcement 322/TB-VPCP, dated November 14, 2016 and Announcement 48/TB-VPCP dated January 25, 2017 by the Office of the Government on the conclusion of Deputy Prime Minister Vuong Dinh Hue, who has assigned the People's Committee of An Giang province to coordinate with other provinces in the Long Xuyen Quadrangle sub-region to build the project "Linking Sustainable Development of the Long Xuyen quadrangle"; collect comments from concerned ministries, agencies and scientists and send them to the MPI for appraisal and submission to the Prime Minister. Recently, An Giang Provincial People's Committee has cooperated with People's Committees of Kien Giang, Hau Giang and Can Tho to draft the content of the strategic vision of the project, in which these four localities have identified seven linkages serving sub-regional development including: Linkage on scheming and planning; linkage on cooperation in production and trade promotion of agricultural and aquatic products; linkage on tourism development; Linkage on water resources management, environmental protection, multi-purpose responses and adaptation to climate change; linkage on investment attraction; linkage on establishment of the regional information system; and linkage on building institutions, policy for the sub-region. 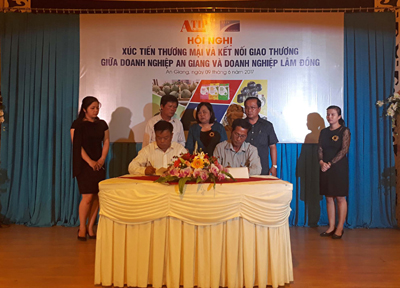