Accordingly, Quang Ninh secured the first place in the PCI ranking for the second year in a row with 70.36 points, followed by Dong Thap 70.19 points, Long An and Ben Tre, third and fourth, respectively. Da Nang, dropped to the fifth from the second position in 2017, scoring 67.65 points.

The two economic powers, Hanoi and Ho Chi Minh City, are among the top 10 provinces and cities, ranked 9th and 10th respectively. According to Dr. Vu Tien Loc, VCCI President, this is the highest position of Hanoi ever and shows that the capital city has made a strong breakthrough in its business environment over the years.

Other localities in the high ranking group include Can Tho, Lao Cai, Vinh Phuc, Tay Ninh, Bac Ninh, Hai Phong, and Khanh Hoa. Lai Chau and Dak Nong are at the bottom of the list. 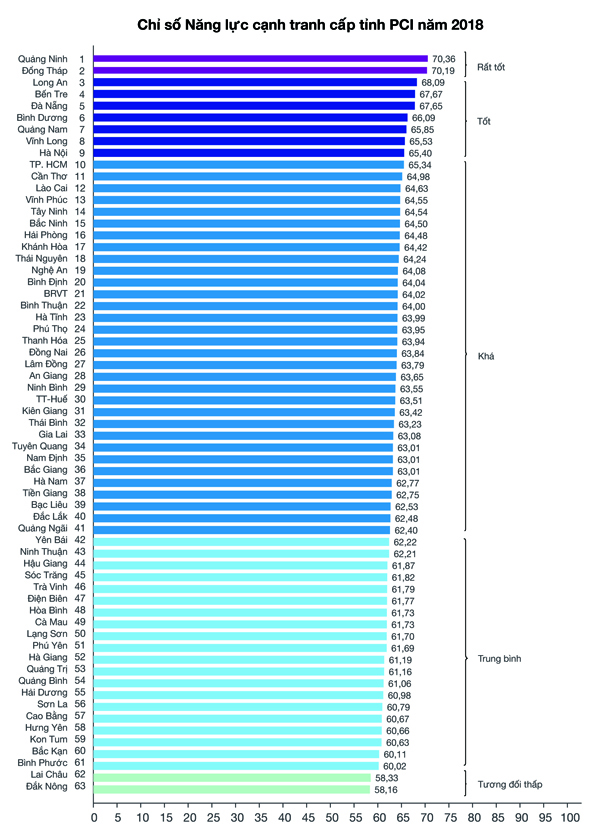 Mr. Dau Anh Tuan, Director of VCCI Legal Department said that the PCI survey in 2018 shows that some business areas have changed more positively. Informal costs continue to be cut, business environment for private enterprises tends to be more equal and administrative reforms are improving.

However, businesses expect the government to improve the transparency of the business environment, increase the quality of labor training, improve business support services, and create more favorable conditions in applying for a business license, especially land and tax procedures.

Small and super small businesses also reflect that they are having difficulties in their operations. "Therefore, the role of the authorities is becoming more important than ever," Mr. Tuan said. According to the PCI report 2018, 49% of private enterprises and 56% of FDI enterprises said they would expand business in the next two years.