Vinh Long province has always identified administrative reform (AR) as the most important solution to build a service government and create an open and favorable business environment for people and businesses. Therefore, over the past years, AR has been a task that has been given attention by the whole provincial political system and obtained positive results, contributing to improving the Provincial Competitiveness Index (PCI) of the province. Vietnam Business Forum reporter has an interview with Mr. Tran Van Hen, Director of the Provincial Department of Home Affairs, about this topic. Duc Binh reports.

What is your assessment on the quality of AR, especially the administrative procedure reform (APR), of Vinh Long in recent years?

AR is an important task, and has always been given attention, directed and implemented synchronously by the Provincial Party Committee and Provincial People's Committee in all fields including: Institutional reform, APR, organizing apparatus, building a team of civil servants, public finance and administrative modernization. In particular, APR is the top concern, because this is an area directly related to people and organizations through the settlement of administrative procedures. 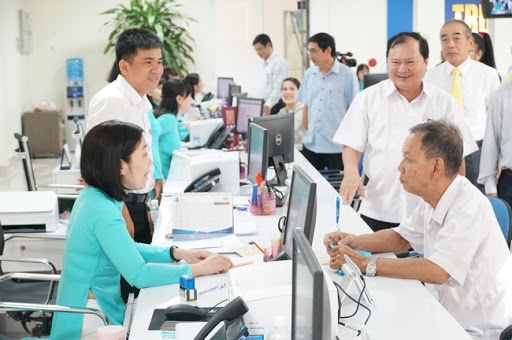 The province has also developed one-stop software to be deployed to the commune level; set up the Provincial Public Administration Service Center to receive and return the results of administrative procedure settlement of provincial departments, committees and agencies, helping people and organizations not to have to travel to many places. In addition, the reception and return of results have been implemented through public postal services, online public services at levels 3 and 4, so that people and organizations can choose the forms to conduct administrative procedures.

2020 is the last year to implement the AR Master Program in Vinh Long province for the period 2011 - 2020. Can you tell us outstanding results in the process of implementing the Program?

The AR Master Program in Vinh Long province for the period 2011 – 2020 was implemented by the Provincial People's Committee in 6 areas and achieved many results. Specifically:

Secondly, administrative procedures applied in the province are public, transparent, and listed in many forms; the administrative procedure settlement process is built specifically, the time is clearly defined, the responsibilities of individuals and organizations are identified when there is delay. Processing time is shortened from 2 to 10 days compared to regulations.

Thirdly, arranging and consolidating the organizational apparatus of administrative agencies and non-business units according to regulations, without generating more intermediaries, streamlining internal sources, reducing the number of leaders at unit level and streamlining staff. These have contributed to organizing a streamlined, effective and efficient apparatus of the political system at all levels.

Fourthly, the team of cadres and civil servants has been gradually improved in terms of political quality, responsibility, professional capacity, administrative skills, working style and service attitude. The team of cadres and civil servants of the province with master and doctor degrees is increasing (before 2015, there were 561 people with postgraduate degrees, currently there are 1,367 people with postgraduate degrees). Basically, the province has completed a project to identify job positions associated with each function and task of the agency or unit.

Fifthly, the implementation of payroll and funding has helped agencies, units and localities to actively manage assigned tasks and duties, raising awareness of thrift and fighting wastefulness in the use of  budgets, step by step increasing income for cadres, civil servants and public employees.

Sixthly, IT infrastructure in agencies and units has been invested and upgraded basically to meet the requirements of deploying IT applications for professional work.

In general, departments, sectors and district-level People's Committees have paid close attention, developed and implemented the AR plan under the direction of the Provincial People's Committee. Up to now, the tasks in the province's AR plan for the period 2011 - 2020 have been successfully organized, coordinated and performed by agencies.

As an advisory body to the Provincial People's Committee on AR, can you share the plan and goals of the implementation of AR for the 2020 - 2025 period of Vinh Long province?

Regarding institutional reform: To continue building and perfecting the local system of institutions and legal policies on the basis of the Central regulations; promptly abolish regulations no longer suitable or contrary to current regulations.

About organizational structure: Continuing to review, arrange, and reorganize specialized agencies under People's Committees of provinces and districts according to the Government's framework regulations; arranging and reorganizing public non-business units according to sectors, fields and market and social demands; streamlining payroll according to the roadmap, and reducing the number of deputies of agencies, organizations and units in line with the local situation.

For improving the quality of the team of cadres and civil servants: Strengthening the training and retraining of cadres, civil servants and public employees to meet the standards of positions, ranks and professional titles; arranging cadres with training qualifications suitable to their functions and tasks, and ensuring appropriate structure of gender and ethnic people in each agency, organization or unit.

For administrative modernization: Upgrading the architectural framework of the second version of Vinh Long province’s e-government, implementing interconnection of information systems, database infrastructure, digital data sharing; focusing on organizing the pilot implementation of smart urban services in Vinh Long. Developing a project to develop a smart urban service platform in the province for the period 2020-2025 with a vision to 2030 according to Decision 950 / QD-TTg dated August 1, 2018 of the Prime Minister; striving for the target that by 2025, 100% of transactions on the National Public Service Portal, the Public Service Portal and the provincial electronic one-stop information system are electronically authenticated; 90% of work records of departments, committees and sectors of the province; 80% of work records at district level and 60% of work records at commune level will be handled in the online environment (except for records under state secrets).