Bim Son City recently released a master plan for development along the Tam Diep River, with a focus placed on infrastructure and transport development in a bid to become a third-class urban area in Thanh Hoa province in 2025. 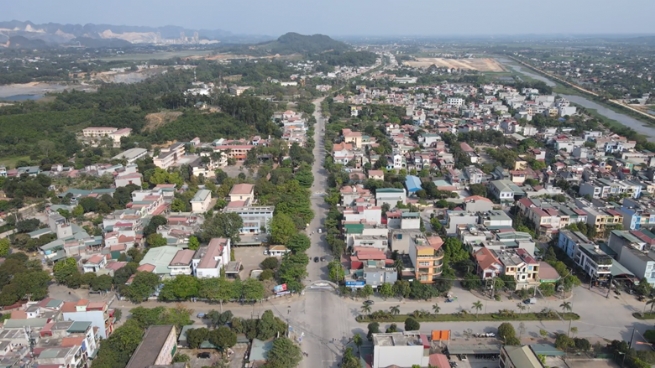 According to its development orientation in 2021-2025, Bim Son will strive to become a third-class urban area - a northern nuclear industrial and economic hub of Thanh Hoa province. It targets to become an industrial city with an urbanization rate of 100% and a central traffic hub in the country. A lot of key traffic routes to be developed within a radius of 5km from the heart of Bim Son City, including North-South Expressway (the section from Mai Son to National Highway 45), Quang Ninh - Nga Son - Ca Mau Coastal Highway, North-South High-speed Railway, a 34-meter wide traffic route directly linked to Thanh Hoa City developed according to Bim Son City’s administrative development plan and Tam Diep riverside urban planning to 2030. This will be a driving force for future development of Bim Son City in 2021-2025.

Fostering economic development and improving people's lives is one key task in the 2021-2026 term. The government of Bim Son City focuses on leading, directing and carrying out the planning. This is a pivotal task to move forward and turn Bim Son into a third-class provincially governed urban area.

The city’s production value in 2020 totaled VND33,737.2 billion, 1.98 times that of 2015. In 2016-2020, its economic growth averaged 14.6% a year, higher than the province's average. The economic structure continued to shift positively toward the right pattern where the share of industry - construction and service - commerce will pick up and the share of agriculture - forestry will contract. The per capita GDP reached VND80.1 million a year. Total investment fund in the 2016-2020 period was VND21,143 billion, up 1.4% higher than the target. The investment mix has been restructured to gradually reduce the share of the state budget and increase the share of corporate fund enterprise and people’s fund.

The industry - construction sector continues to maintain high growth, strongly expanded in scale, driven by many new manufacturing facilities that make well-branded and competitive products. In 2020, industrial and construction production value amounted to VND18,240.2 billion, 1.97 times higher than in 2015. The value represented a year on year growth of 14.58%, as much as 1.38% higher than the target.

The trade and service sector continues to have qualitative development. Markets, supermarkets and commercial stores are being invested. Total retail revenue of consumer goods in 2020 was VND6,100 billion, an increase of 2.35 times over 2015, representing an average annual growth of 18.6%. The export value reached US$210 million in 2020, as much as 1.9 times higher than 2015. This recorded an average annual growth of 13.4%.

Historical and cultural relics are restored and upgraded. Service quality is improved to better serve tourists far and wide.

The town's agricultural production develops in a sustainable way in line with the new rural construction program. The agricultural production value in 2020 was VND210.5 billion. More than 70ha of unproductive rice land was used for other farming models that bring in higher economic value, including organic vegetables, red dragon fruit and green-skin pomelo. The product value per 1 hectare of arable land and aquaculture in 2020 was over VND100 million, the highest in Thanh Hoa province.

Motivated to become a third-grade urban area in 2021-2025, the local government has invested a lot of money in socioeconomic development and environment improvement to make Bim Son City a leading economic engine, not only for Thanh Hoa but also for the whole country, a move become a model industrial city in the future.