Effort for the highest budget revenue 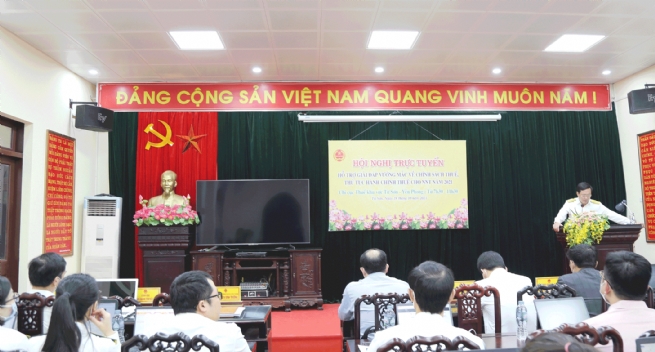 Despite being strongly affected by the COVID-19 pandemic, the tax debt did not increase in the province. Specifically, its overdue tax was estimated at VND898.4 billion as of December 31, 2021, a drop of VND2 billion or 0.3% from a year earlier. The Bac Ninh Provincial People’s Committee decided to write off interest of VND3,827 million arising out of overdue tax incurred by 2,868 taxpayers. In 2021, the department handled taxes in arrears and proposed writing off some tax as per Resolution 94 of the lawmaking National Assembly, reaching 98% of impacted entities.

To effectively prevent tax loss, Bac Ninh Taxation Department audited 1,091 enterprises as expected, 13% more than in 2020. The department collected VND330 billion of tax in arrears and fines, 5% more than in 2020. The agency did not refund VND25 billion of tax, reduced the amount of loss by VND570 billion as reported by taxpayers and reduced VND28 billion of deductions. The amount of tax paid to the State Budget was VND320 billion. In addition, the department inspected a total of 15,082 tax declaration forms, of which 14,600 forms were accepted for the first time, 410 forms needed supplementing and 72 forms were requested for audits of taxpayers. It revised up VND90 billion of tax; reduced VND46 billion of value-added tax and lowered loss reported by taxpayers by VND50 billion.

With the motto “Be attentive to people and taxpayers”, the department stepped up visual communications like posters, banners and public announcements; provided direct instructions at tax offices, via telephone, in writing, via email, via online Q&A channel, on its website and via Zalo messaging application.

In 2021, the COVID-19 pandemic affected taxpayer support. However, it made every effort to launch five online dialogues and problem-solving conferences for taxpayers via its website. This helped ensure maximum cost efficiency in the context of pandemic prevention.

Furthermore, to facilitate people and businesses, Bac Ninh Tax Department focused on the effective enactment of support policies for enterprises and taxpayers affected by the pandemic. The department informed and promptly provided preferential support policies for taxpayers; synthesized a list of district-level areas affected by the COVID-19 pandemic to guide taxpayers to submit records for tax and land rent exemption and reduction.

Mr. Ngo Xuan Tong, Director of Bac Ninh Tax Department, said that to remove difficulties for taxpayers, attract investors and build and maintain a transparent environment, in the coming time, the department will continue to quickly, effectively implement tax support packages for taxpayers according to policies adopted by the National Assembly and the Government. At the same time, it will step up public administration reform to boost the performance of online services and electronic invoices to reduce costs for taxpayers and better manage tax sources.n