In 25 years since re-establishment (1992 - 2017), with the determined participation of the entire political system, while promoting internal resources and effectively exploiting the external forces, Binh Thuan has always maintained stable economic growth, increased social investment in terms of scale, pace and structure of investment. In order to make strong development, according to Mr Nguyen Ngoc Hai, Chairman of the Provincial People's Committee, Binh Thuan has made great efforts to effectively exploit the available abundant natural resources to develop high-tech industries such as high-tech agriculture, marine economy, tourism and energy. Truong Thanh reports.

Binh Thuan is known for having favourable natural conditions for agricultural development with mainstay being dragon fruit and shrimps. How does the province implement the restructuring of agriculture, towards high-tech applications in agriculture?
In recent years, implementing the policy to restructure the agriculture of the Prime Minister, the province has set up and developed groups of key agricultural products with high yield, quality and added value associated with the region; among which the most prominent products are dragon fruit and shrimp spawn, creating favourable conditions to promote product advantages and regional advantages.

Binh Thuan determines that promoting high-tech application in agriculture is an indispensable trend, to create a breakthrough to enhance the competitiveness of local agriculture in the integration process. Based on that, the province has developed a project on development of high-tech agriculture in the province up to 2020, of which one is a high-tech dragon fruit farm with a size of 52 hectares and an area of high-tech aquaculture area of Chi Cong with the scale of 154 hectares, currently invested by the central government to build infrastructure. Recently, the Prime Minister has approved Binh Thuan province to develop the project of constructing a high-tech agriculture area in Bac Binh district with the area of 2,000 hectares and many potential businesses are interested in investing. Thong Thuan Co., Ltd is implementing the project of raising high-tech cows in Song Binh commune, Bac Binh district with the expected scale of 23,600 cows. The project will be the nucleus for supplying breeds, services, and encouraging agricultural expansion for the development of cattle breeding in Binh Thuan.

In addition, the provincial agricultural sector is gradually applying high technologies in production. Some models of production applying advanced technology in households, enterprises and cooperatives are being implemented (planting dragon fruit according to VietGAP, Global GAP standards, production of rice seed, shrimp spawn by biosecure methods...). This will contribute to the success of the restructuring of the agricultural sector towards sustainable and efficient high-tech agriculture. 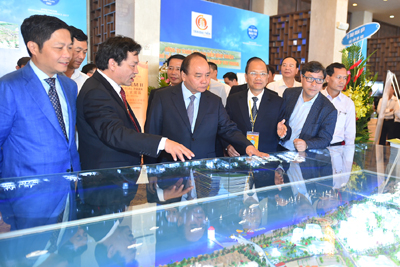 What is the province's orientation to attract investment in marine economy?
Binh Thuan has a coastline of 192 km and Phu Quy Island with an area of 18 km2. It also has territorial waters and fishing grounds of over 52,000 km2. The province has seven coastal districts, towns, city and islands with 36 communes, wards and towns adjacent to the sea. Binh Thuan's sea area has diversified aquatic resources in terms of species and reserves and is adjacent to the large fishing grounds of the whole country such as: Southeast fishing grounds, Truong Sa - DK I, the central of the East Sea. The total area of marine fish from 50 metres to shore is about 220,000 - 240,000 tonnes, the ability to exploit is from 100,000 to 120,000 tonnes per year. Coastal waters of the province are also home to some bivalve species with high economic value such as scallops, arkshell and oyster. These are typical species which are not found in other coastal areas of Vietnam with annual production of 20,000 - 40,000 tonnes/year. In addition, good water quality, high heat and stability are important conditions for the province to develop shrimp and marine seafood production.

The above characteristics and conditions have created a great advantage for Binh Thuan in fisheries development. To exploit this strength, the orientation in the coming time will focus on improving the efficiency of exploitation, aquaculture, processing and services associated with the protection of aquatic resources. The province also encourages fishermen to invest in building large-scale boats, promoting the model of offshore fishing vessels, linking with logistic services and processing on the sea, and contributing to protecting the national sovereignty of the sea and islands. Binh Thuan also focuses on the development of seed production associated with maintaining the prestige of quality, forming concentrated shrimp breeding areas with high technology; maintaining brackish water aquaculture area and attaching importance to intensive investment, encouraging the multiplication of models of application of new technologies; developing some concentrated freshwater aquaculture areas according to planning; strengthening fishing grounds and conserving marine biodiversity.

In addition, the province will implement the Government's incentive policies for fisheries development; further expand and promote the model of solidarity group, fishery union; make the fullest use of capital sources, increase investment in, renovate and maintain the fishery technical infrastructure system; encourage investment in equipment and technologies for aquaculture, preservation and processing of aquatic products, especially shrimp seed production and export seafood processing to reduce the loss rate, improve the quality and value, increase the competitiveness of products. The province also builds Phu Quy Island into a logistic service centre for offshore fishing and brings Phu Quy to become a hub between sea and coastal areas.

On behalf of Binh Thuan authorities, what message do you have to send to the business community – the growth engine of the local economy?
In the period of renovation, integration and development, Binh Thuan businessmen and enterprises have actively responded to the emulation movements, increasingly asserting their pivotal and proactive role in the construction and developing the province. Especially in the province there have appeared many large enterprises, becoming the symbol and pride of the province such as Rang Dong Group and Quan Trung Trading and Manufacturing Co., Ltd. Newly established groups are not only increasing in terms of quantity but the quality of work is also improved.

To improve the business investment environment, create favourable conditions for enterprises to develop in accordance with the law, the provincial Party Committee and People's Committee of Binh Thuan province always considered the development of business is the foundation and the top priority of localities in socio-economic development. The province always protects the right to own property and business freedom right of businesses; takes enterprise as the object of serving; ensuring the consistency, creating a favourable business environment for business development.

Provincial People's Committee issued Plan 652/KH-UBND dated February 28th 2017 implementing Resolution 19-2017/NQ-CP of the Government and Action Plan 2390/CTr-UBND dated July 7, 2016 implemented Resolution 35/NQ-CP of the Government to implement many solutions to improve the business environment, remove barriers and create favourable conditions for businesses to develop. In addition, the province also signed a commitment with the Vietnam Chamber of Commerce and Industry to create a favourable business environment for enterprises; organises at least two public dialogues with the business community and enterprises in order to promptly remove difficulties and problems; creates favourable conditions for enterprises and businessmen.

It can be seen that the wave of globalisation and the 4th Industrial Revolution is entering the boom stage, requiring enterprises to develop at a higher level, stepping up in the higher level in the value chain. In that context, I hope that every business in Binh Thuan will promote the spirit of patriotism, show their bravery, wisdom, gathering into the power to overcome all difficulties and challenges; continue to start up business and sustainable development, to not only enrich themselves, but also enrich the country.