Binh Thuan province has been executing its socio-economic plans and State budget estimates in 2017, within the context of the domestic economy still facing plenty of difficulties and challenges. But, with the effort of the entire political system, the business community and the people in the province, its socio-economic performance in the first six months of 2017 managed to attain positive progress and achieve very encouraging results.

Mr Nguyen Manh Hung, Member of the Central Party Committee and Secretary of the Provincial Party Committee, said, Binh Thuan province is determined to promote its internal force and attract external resources in the second half of the year to fulfil all objectives and plans to add ‘new colours’ to the socio-economic picture in 2017 and realise the goal of making the economy of Binh Thuan province grow rapidly and sustainably towards industrialisation and modernisation, as stated in the Resolution of the 13th Congress of the Provincial Party Committee (2015 - 2020 term). Truong Thanh and Viet Hung report.

Could you please tell us the highlights of the socio-economic performance of Binh Thuan in the first six months of 2017?
In the first half of this year, the gross regional domestic product (GRDP) expanded 6.68 per cent over the same period of last year. Total State budget revenue was estimated at VND5,201 billion, equal to 64.8 per cent of the plan and up 14.7 per cent year on year. State-funded investment capital was VND944 billion, or 52.5 per cent of the plan.

The value of industrial production in the six-month period reached VND11,307 billion, equal to 42.1 per cent of the full-year plan and up 5.1 per cent year on year, of which the processing and manufacturing industry accounted for VND7,444 billion, representing an on-year growth of 7.9 per cent. Many industrial products posted considerable year-on-year growth rates, e.g. rubber latex processing (20.2 per cent) and animal feed production (13.7 per cent).

Tourism, service, trade and export grew stably. The province welcomed 2.34 million visitors and tourism revenue was forecast at VND5,343 billion. The province’s export value was US$275 million, with an on-year growth seen in all exported commodities. Domestic trade remained stable. Total retail sales of goods and services were projected at VND22,107.9 billion, equal to 49.1 per cent of the plan and up 11.9 per cent year on year. 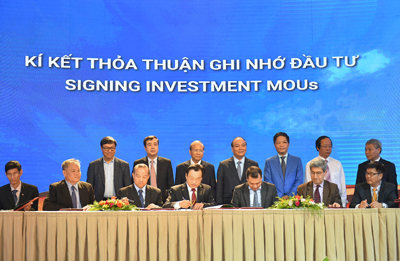 2017 is the banner year for executing the five-year development plan as stated in the Resolution of the 13th Provincial Party Congress. Could you please talk about the solutions the province has adopted to accomplish targets set for 2017?
The Provincial Party Executive Committee has defined clear tasks and solutions to translate the Resolution of the 13th Provincial Party Congress into practical effect. Specifically, the Executive Committee has focally carried out solutions to change the growth model driven by economic restructuring; sped up administrative procedure reform to create a favourable environment for all sectors and areas to develop rapidly and sustainably; directed relevant bodies to deal with obstacles and difficulties facing enterprises; mobilised investment resources for socio-economic infrastructure development; developed human resources; implemented social security policies to take better care of disadvantaged people; and engaged all walks of life to build a cultured life.

In addition, the Provincial Party Committee has focused on building a strong and comprehensive political system, improving the performance of State management apparatus at all levels, raising the responsibility of heads of agencies and units; increasing the authority and responsibility of unit leaders in dealing with subordinate officers when there are signs of violating, delaying, delay or poorly performing their assigned duties or tasks, violating official ethics and having public confidence.

To develop the economy of Binh Thuan province rapidly and sustainably towards industrialisation and modernisation, as stated in the Resolution of the 13th Provincial Party Congress, what key solutions will the Provincial Party Committee focus on?
The 13th Provincial Party Congress of Binh Thuan province set the overall objective of “Strengthening the clean and strong Party organisation, enhancing the managerial and operational performance of the State apparatus at all levels, upholding socialistic democracy and the power of great national unity, exploiting and effectively using resources, potential and advantages, actively integrating and strongly developing marine economy, tourism and energy, promoting the province's economy to develop quickly and sustainably in the direction of industrialisation and modernisation policy.”

To carry out the above objectives, the Party Committee has figured out four key tasks and four breakthrough stages. The four key tasks are (1) building a clean and strong Party apparatus; improving the quality of Party cadres, civil servants and officials; (2) synchronously implementing solutions to change the growth model driven by economic restructuring; reviewing, supplementing and promulgating policies to effectively unlock local potential and advantages; promoting the development of marine economy, tourism and energy; (3) strengthening national defence and security, maintaining social order and safety; and (4) effectively implementing policies on social security, sustainable poverty reduction together with effectively addressing social problems.

The four breakthrough stages are (1) accelerating administrative reform; (2) building a synchronous infrastructure system; (3) improving the quality of human resources; and (4) applying scientific and technological achievements on a large scale.

On October 30, 2016, General Secretary of the Communist Party of Vietnam Nguyen Phu Trong signed Resolution 04-NQ/TW with the aim of enhancing Party building and rectification, and preventing and curbing ideological, ethical and lifestyle degradation as well as the manifestation of “self-evolution” and “self-transformation” inside the Party. As the Party chief of Binh Thuan province, what do you think about the building and rectifying of the Party now?
Resolution 04-NQ/TW is a very important resolution that addresses an underlying and urgent issue and receives great interest and appreciation of Party cadres and the masses.

In the past time, the Provincial Party Committee has thoroughly and seriously implemented the Resolution in a timely manner. A lot of tasks have been introduced mainly focusing on personnel work, aim to overcome existing shortcomings in personnel work and resolutely prevent the recession of political ideology, ethics and lifestyle, and manifestations of "self-evolution" and "self-transformation" of Party members in order to build a strong contingent of Party members capable of leading the province's political system to fulfil the tasks mentioned above; and develop Binh Thuan province quickly, comprehensively and sustainably in the coming time. At the same time, the Provincial Party Committee and its Executive Board also want people from all walks of life, including businesspeople, to intensify dialogues and consultations with Party committees and governments on issues of their concern in the spirit of building a strong and clean Party as expected by the people.