Thai Nguyen province is adjacent to Hanoi in the greater Hanoi capital region, defined as one of the major centers of northern midland and mountainous provinces. The province has a natural area of ​​over 3,500 square kilometers. It is considered one of the political and economic centers in the northeast midland and mountainous region, the gateway for socioeconomic exchanges between the northern midland and mountainous region and the northern Red River Delta region. Thai Nguyen is bordered by Bac Kan province to the north, Vinh Phuc and Tuyen Quang provinces to the west, Lang Son and Bac Giang provinces to the east, and Hanoi to the south. Thai Nguyen has a convenient traffic system connecting with localities and international border gates: The new National Highway 3 linking Hanoi, Thai Nguyen and Bac Kan; National Highway 37 connecting Bac Giang, Thai Nguyen and Tuyen Quang; and National Highway 1B linking Thai Nguyen and Lang Son. Thai Nguyen is also the third-largest training center in the country with nine universities, 12 colleges, eight professional intermediate schools, and 30 vocational training centers. The province is a training center and a technology research and transfer center. Besides, it is also a medical center of the northeast region with one specially ranked national hospital, eight provincial hospitals, three general hospitals, nine district medical centers and four medical centers. 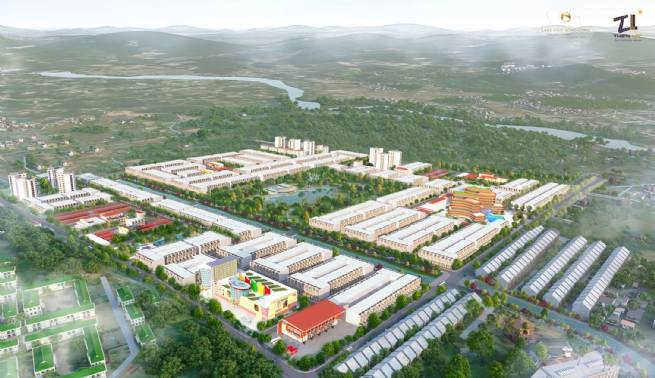 Thai Nguyen has been strongly attractive to FDI flows in recent years. The breakthrough development of industrial production not only gives a boost to the economy but also draws a large number of workers, engineers and foreign experts to live and work in the province, resulting in great housing demand. Besides, Thai Nguyen is one of a few northern provinces to invest strongly in traffic such as Hanoi - Thai Nguyen Expressway, Thai Nguyen - Cho Moi Road, extended Bac Son Road, and Viet Bac Road.

Given the advantages of geographical location and transportation, Song Cong City is a large industrial center and economic transshipment hub to areas inside and outside Thai Nguyen province. In fact, in the past time, although the country's economy was heavily impacted by the COVID-19 pandemic, Song Cong's growth still reached and exceeded the plan, and its investment flows remained brightly robust. In particular, many big investors continued to invest and expand their projects in the city, including Thien Loc Construction Investment Joint Stock Company.

With a convenient location, 20 km south of Thai Nguyen City, 17 km from Nui Coc Lake, 45 km from Noi Bai International Airport and more than 50 km from Hanoi, Song Cong City is very attractive to investment flows, industrial, trade and service development since there are many waterways, and good road networks comprised of National Highway 3, Hanoi - Thai Nguyen Expressway and Hanoi - Quan Trieu Railway. As a result, Song Cong has become a promising and developing city of the Northeast region.

Grasping the advantages, prospects and potential of Song Cong City, many real estate investors have quickly chosen it as their investment destination for large-scale projects. Thien Loc Song Cong Urban Area invested and developed by Thien Loc Company is one of the attractive projects because of its superiority. To create a comfortable and top-class living space in Song Cong City, right from the project launch, Thien Loc paid great attention to synchronous planning to create a densely populated colony featuring green spaces suitable for restaurants, supermarkets, kindergartens, cultural houses, offices for rent and community sports areas to bring convenience in daily life and meet resident's demand for learning and entertainment.

With well-prepared planning and design, Thien Loc Song Cong Urban Area promises not only to be an ideal living and working place, but also ensures sustainable investment value over time. As a reputable and experienced real estate developer, Thien Loc has also fulfilled its commitments to customers to the progress and quality of the project as well as high responsibility for the legal status of the products sold to customers. Thus, besides owning a desirable, profitable real estate product, customers can also feel secure when it is guaranteed by the highest legal values.