In the 2021-2025 period, Cao Bang province will carry out many programs and solutions to enhance its competitiveness and business climate to attract and efficiently use investment resources to create new motivations for rapid and sustainable economic growth, said Mr. Hoang Xuan Anh, Chairman of Cao Bang Provincial People’s Committee, in an exclusive interview granted to Vietnam Business Forum. Ngo Khuyen reports.

Cao Bang province wrapped up the 2015-2020 term with great successes in promoting economic growth and attracting investment flows. Could you please introduce the achievements in the past time and how the province will promote these in the 2020 - 2025 period?

In the 2015-2020 term, Cao Bang province completed and exceeded all 17 main targets. Specifically, the gross regional domestic product (GRDP) expanded over 7% a year; the economic structure shifted positively toward the desired pattern with an increasing share of industry and construction and a smaller share of agriculture; budget revenue grew by 11% a year; GRDP per capita reached VND37.2 million in 2020; infrastructure was strongly upgraded; and the face of urban and rural areas was lifted.

Promoting the achievements in the past term, pursuing overall targets set for the 2021-2025 phase, Cao Bang province will strongly promote internal strength, innovation and willpower to create new breakthroughs in all fields; gradually build and develop the digital economy; accelerate administrative reform, upgrade the business investment environment, attract all investment resources for development, enhance economic competitiveness, and ensure social security. The province has set out specific targets for the next phase. The GRDP will grow by over 8% a year. By the end of 2025, its economy will be made up of 16.4% agriculture, forestry and fishery; 32.4% industry and construction; and 48.2% service. GRDP per capita will reach VND60 million in 2025. The agricultural yield will reach VND50 million per hectare of arable land. The import and export value will rise by 10% a year; the budget revenue will expand by 12% a year; the total social investment capital will grow by over 11% a year. In 2024, the Dong Dang (Lang Son) - Tra Linh (Cao Bang) Expressway - Phase I will be completed. In 2025, 85% of the length of district and commune roads will be asphalted/concreted, and 100% of communes will have asphalted/concreted roads leading to administrative centers. 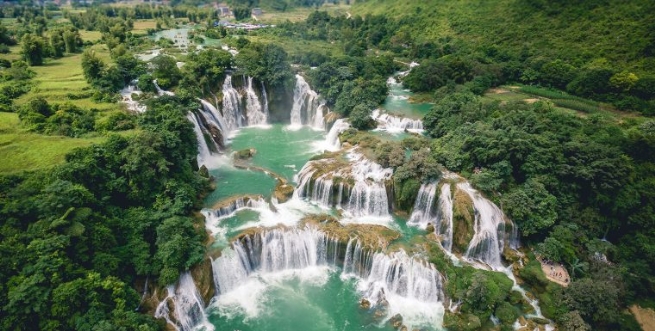 To successfully implement the above objectives, Cao Bang has defined three breakthrough solutions, including (1) Developing sustainable tourism - service, gradually turning tourism and service into a key economic sector, building Cao Bang into a tourist center of northern midland and mountainous provinces; (2) developing smart agriculture and commercial agriculture, enhancing the competitiveness of agricultural products, and exporting local products to domestic and foreign markets; (3) developing the border economy to tap advantages generated by a 333-km borderline where there are a lot of border gates with China to build Cao Bang into a cargo transshipment center from Lach Huyen Port (Hai Phong) to Chongping - Urumqi (China) - Khorgos (Kazakhstan) to European countries and vice versa. 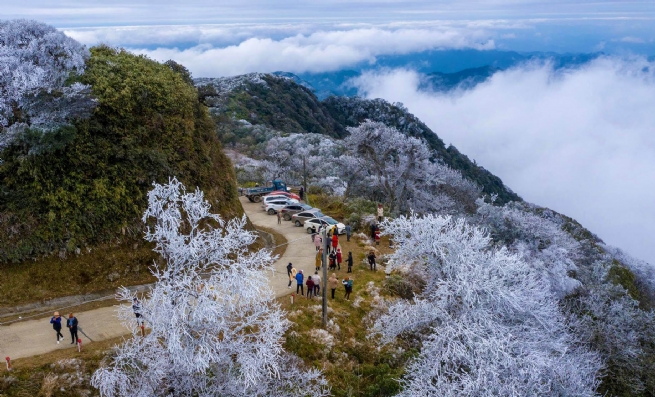 At the same time, Cao Bang will focus on implementing three following programs:

(2) Personnel development program for all levels, aimed to improve the quality of human resources, especially in rural areas, to clear bottlenecks and hindrances to enhance human resource quality; build the public employee force at all levels, especially at strategic levels, with sufficient qualities, capabilities and reputation to perform their missions.

Currently, the Provincial People's Committee is directing all levels and branches of government, localities and agencies to work out concrete socioeconomic development programs and plans for the whole phase and for every year, and to implement effective solutions to achieve 2021-2025 goals.

The Dong Dang (Lang Son) - Tra Linh (Cao Bang) Expressway has created a driving force for stronger socio-economic development of Cao Bang province. Would you tell us more about this project?

The Dong Dang (Lang Son) - Tra Linh (Cao Bang) Expressway project was approved by the Prime Minister in Decision 1212/QD-TTg dated August 10, 2020. It will be built in the form of public-private partnership (PPP), in which 20% will come from the central budget, 20% from the local budget and 60% from investors and credit loans.

To date, the Provincial People's Committee has planned to carry out topographical and geophysical surveys; project feasibility studies, set up ground clearance landmarks for localities to manage the planning, extract and measure the land. At the same time, the committee has also invited partners to study, survey and deploy the project design; coordinate the implementation of landscape architecture to minimize impacts on the UNESCO-recognized Cao Bang Non Nuoc Global Geopark.

Clearing traffic infrastructure bottlenecks will help the province to achieve comprehensive, rapid and sustainable development. Therefore, the expressway will open a breakthrough development to meet expectations of the Party, authorities and people of the province.

Over the past years, Cao Bang province has carried out many solutions and activities to raise PCI rankings. In the coming time, how will the province continue to improve the PCI standing and the investment and business environment?

In the past five years, Cao Bang province has carried out projects and action plans to facilitate administrative reform, improve the business investment climate and attract investment funds into the locality. After five years, the business investment environment has been significantly improved. The Provincial Competitiveness Index (PCI) has climbed year after year. Specifically, its PCI scored 58.89 points in 2017 (5.9 points higher, climbing up five places over 2016), ranking No. 58 out of 63 provinces and cities - moving from the relatively low group to the average group; 60.67 points in 2018, ranked No. 57; and 63.69 points in 2019, ranking No. 54.

To further strongly improve the business investment environment and competitiveness, the province will focus on implementing the following solutions:

First, upholding the roles and responsibilities of agency leaders to enhance the business investment environment and competitiveness. This is considered a key task.

Fourth, building mechanisms and policies for innovation and entrepreneurship, supporting and attracting businesses to invest in strong fields; implementing support solutions to remove difficulties for enterprises, the collective economy and cooperatives to access credit capital and premises.