From a production facility staffed with just 50 workers at the start, in its 30 years of development, Dragon Group has constantly endeavored, grown and realized its aspirations of becoming a multi-business corporation in Vietnam, not only in Thai Binh province.

The turn of a long journey

Perhaps Vu Thi Tha, Chairwoman of the Board of Directors and founder of Thang Long Import-Export Investment Joint Stock Company (Dragon Group), found it very, very difficult to make a decision to step into business. After more than 30 years, she still recalls this milestone with pride. That driving force helped her overcome all challenges and this "source of fountain" is being led firmly forwards by the next generation of leadership of Dragon Group. 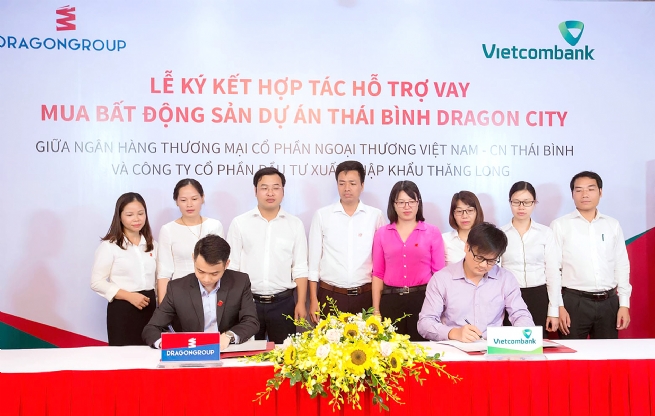 At the age of 18, Tha, born in Quynh Phu district, was a secretary of Youth Union of an export carpet production facility in Thai Binh Town, a promising position for her if she followed the political path. That prospect was even further confirmed when the Youth Union was always at the forefront of any movement. With many achievements at work, she was honorably admitted to the Party at the age of 20 years. But, she decided to shift to business by establishing an export handicraft production facility at that time, in 1989.

After 1990, the export to the former Soviet Union and Eastern Europe was difficult, and she established Thang Long Garment Factory (in Thai Binh Town, present-day headquarters of Dragon Group). Her business was favorable. In 2002, the company expanded its operations by investing in Factory No. 2 in Quynh Coi Town - Hoang Anh Export Garment Factory. This was also the first industrial garment production facility built in her hometown, Quynh Phu district. Boosted by ongoing development momentum, in 2006, the third factory - Viet Long Export Garment Factory in Cau Nghin Industrial Park was inaugurated. Since then, Dragon Group has kept investing in upgrading equipment and technology and expanding the market to affirm its position as a prestigious textile and garment producer in Thai Binh with three garment factories and 34 satellite production units which employ 3,000 workers.

Manufacturing success was not enough for this ambitious and energetic business leader. In 2009, Dragon Group expanded its business into construction where progress, technical quality and finery of all projects was guaranteed. Specifically, in 2013, Dragon Group won a contract to build Dikes 5 and 6 in Tien Hai district, a key urgent project that required high progress and complicated technical specifications. After completion, the project was highly appreciated by specialized agencies of the province (leading 24 construction contractors). Thanks to this achievement, the company was honored to welcome the official visit of the Vietnamese President and receive the Certificate of Merits from the Thai Binh Provincial People's Committee.

In 2016, Dragon Group surprised many people in Thai Binh City when it started construction on Ky Dong Avenue and Thai Binh Dragon City Urban Area. The former is 1.6km long and 45m wide with six 8m lanes, 8m sidewalks and a modern lighting system, costing VND300 billion for construction. This is also the backbone of 48-ha Thai Binh Dragon City Urban Area, which consists of 118 villas, 1,039 townhouses and shophouses, and international standard facilities. This is an urban highlight of Thai Binh City.

Extending its success, in 2020, DragonHomes Eco City was launched. The 31.4ha urban complex is considered an "upgraded version of Thai Binh Dragon City" with many high-class buildings, utilities and a wastewater treatment system capable of treating 1,460 cubic meters a day. Powered by AO technology, the treated water meets QCVN 14:2008/BTNMT, Column A.

Beside these pillars, Dragon Group has carried out many trade and service projects, including petroleum trading and smart electric vehicle trading. The highlight is the VinFast Auto Showroom, covering 4,000 square meters on Ky Dong Avenue, which provides such services as VinFast 3S car dealership, spa care system, mini supermarket, gas station and services. In August 2020, Dragon Group's 17 Plus transport brand was officially launched with the most modern 17 Plus Taxi and 17 Plus Limo services for intercity passenger transport in Thai Binh province.

Over the past three decades, Dragon Group has clearly defined its development approach: Some businesses are supporting, some are fundamental and key, and some are prospective. The current most important task for entrepreneur Vu Thi Tha is to "spread aspirations", foster the next leadership generation to maintain effective operation of existing business and production facilities, recruit highly qualified and devoted human resources to carry out a series of large-scale projects in many localities.

To further strengthen its position in the garment industry, in addition to maintaining operations and improving the capacity of three factories and satellite facilities, Dragon Group is embarking on the expansion of the Dragon Textile export garment factory in Tien Hai district. Meanwhile, in Quynh Phu district, her hometown, Dragon Group accelerated the progress of a high-tech yarn production investment project in Quynh Trang commune, costing VND800 billion. In October 2021, the project cleared 80% of the ground and placed orders to import machinery and equipment from Germany, Switzerland, India and other countries, and is thus expected to come into operation in late 2022. This is a key project of Dragon Group and Thai Binh province, so authorities of all levels are ready to direct and facilitate accelerated construction progress.

In the real estate field, beside DragonHomes Eco City Project that cost VND1,700 billion for construction, Dragon Group is studying the DragonEco Apartment Project covering an area of 11,301 square meters and costing VND302.6 billion for investment. Not only in Thai Binh province, Dragon Group also built a 9.3-ha urban area in Bac Cuong Ward, Lao Cai City, which cost VND948 billion for construction. The project is located on Tran Hung Dao Boulevard and is expected to become a modern, smart and livable residence for Lao Cai people.

Chairwoman Vu Thi Tha added, for a long time, many foreign partners and customers have expressed their desire to build production bases in Vietnam and are ready to cooperate with Dragon Group if they have premises or industrial zones to invest in. For that reason, Dragon Group surveyed its investment opportunities in Thai Binh and other northern provinces and received active support for this from localities.

After three decades of construction and development with the thriving Dragon Group, Tha believes that the ultimate effort will lead to success. Dragon Group has made every effort to become a leading conglomerate in Vietnam, not only in Thai Binh province.