After nearly 60 years of development, Thai Nguyen City, the capital of Thai Nguyen province, has made spectacular breakthroughs in all aspects. This is the premise for the city to make more breakthroughs in the coming time to realize the goal of becoming a smart city with a modern synchronous urban framework infrastructure. 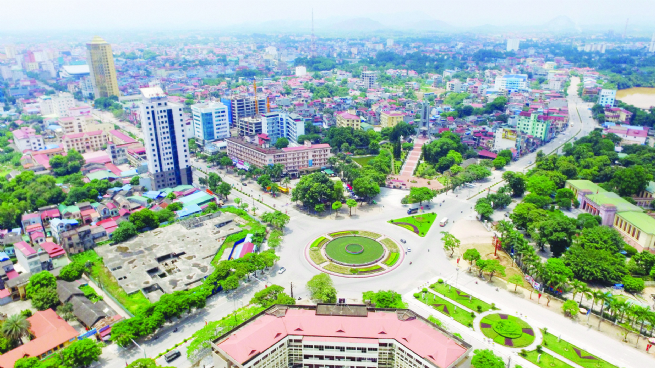 Those are advantages for Thai Nguyen City to boost economic - cultural - social development exchanges with Hanoi, the capital of Vietnam, and northern key economic regions, as well as throughout the country.

After nearly 60 years of construction and development, especially after being recognized as a first-grade provincial city in 2010, Thai Nguyen City has made spectacular breakthroughs. As an economy that relied on heavy industries, the city has now utilized its advantages and opportunities to develop multi-industries to realize the goal of rapid and sustainable economic development. In the 2016-2020 period, its economic growth was over 15% and budget revenue rose by an average of 16.5% annually. Its strong investment inflow led the province, with many important projects deployed effectively.

In 2021, despite the negative impacts caused by the COVID-19 pandemic, Thai Nguyen City still successfully completed its targets. Its manufacturing growth was estimated at over 10.1% in 2021 (much higher than the target of 5% set in the city’s resolution); the industrial production value was forecast at VND11,400 billion (equal to 104.3% of the full-year plan and up 12.5% over 2020), and State budget revenue was projected at VND3,128.13 billion, equal to 133.6% of the plan.

These are important premises and motivations for Thai Nguyen City to complete its goals in 2022 and beyond. Specifically, the city will expand on both banks of the Cau River for urbanization development, aiming to become a civilized and modern city by 2030. At the same time, Thai Nguyen will become one of the centers of economy, digital transformation, culture, education, healthcare, science and technology and tourism, functioning as a development locomotive for the northern midland and mountainous region.

In the coming time, the city will focus on carrying out breakthrough tasks like adjusting the master plan of Thai Nguyen City on construction of large public space complexes (e.g. squares and pedestrian streets), new urban areas, administrative agencies, and the 22,000-seat Thai Nguyen Stadium.

To accomplish the above goals, the city will continue to invite businesses to invest in priority fields and industries that create high added values in line with its development orientation. On the other hand, the city will publicize planning information, attract investment flows and create favorable conditions for investors to implement projects.

To support businesses and investors, the city government will promptly grasp and remove difficulties and create favorable conditions for them to invest in production and business expansion. At the same time, it will accelerate administrative reform, with focus placed on site clearance and environment for investment attraction.