Trung Luong - My Thuan Expressway Project is expected to be inaugurated in late 2020 and completed and put into use in 2021 to clear infrastructure bottlenecks and foster the socioeconomic performance of Mekong Delta people, including Tien Giang.

Trung Luong - My Thuan Expressway Project, costing VND12,668 billion, has a total length of 51.1 km, starting from Than Cuu Nghia intersection (connected to Ho Chi Minh City - Trung Luong Highway) and ending at An Thai Trung intersection linked to National Highway 30 (Cai Be district, Tien Giang province). Started in 2009, after 10 years, the project has constructed just 10% of the workload. In March 2019, Deo Ca Group was offered by investors to join the Project Management Board. By the end of October 2020, after nearly two years, the workload reached 68% of the plan, quick enough to open to traffic by the end of 2020 as planned. 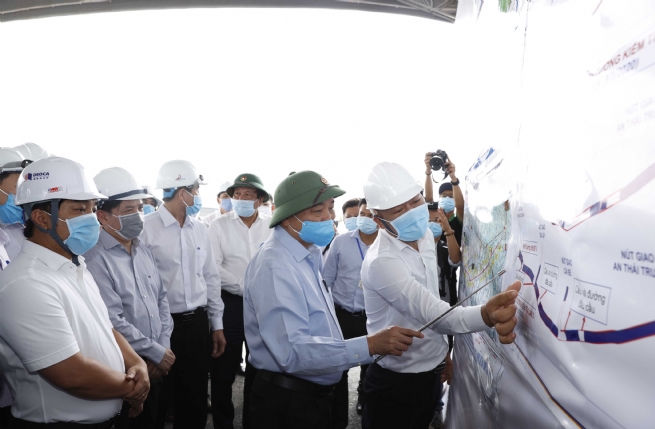 Currently, the project has completed 31 out of 36 construction and installation packages. The remaining five packages (lighting system, toll booth and ITS) will be implemented according to the project progress. Completed workload largely included site preparation, road construction, temporary bridge construction, organic excavation, foundation, sewer installation, piling and boring. Some road sections have been completed.

Not only ensuring the progress and quality of construction packages as approved by investors and contractors, Trung Luong - My Thuan BOT Joint Stock Company revised and adopted a stricter process controlling materials, origin and quality; controlling materials before being loaded to the construction site and before being put into use. In addition, the investor installed 50 surveillance cameras on the project site and arranged personnel to inspect, supervise and make daily image reports. More cameras will be installed at asphalt mixing plants.

Trung Luong - My Thuan Expressway Project is a part of Ho Chi Minh City - Trung Luong - My Thuan - Can Tho Expressway. This route has a particularly important role in connecting the socioeconomic center of the Mekong Delta region with Ho Chi Minh City, the southern key economic region in general and Tien Giang province in particular; and creating a new boost for development and removing traffic congestion for the southwestern region.

Dong said, “Currently, more than 1,500 workers are working on the site with a lot of construction machinery and equipment. They work day and night to offset rain breaks. The company and all the workers are striving to open the road to traffic by the end of 2020.”

Traffic jam nightmares on National Highway 1, which passes through Tien Giang province, will no longer appear with Trung Luong - My Thuan Expressway in operation. Vehicles of less than 16 seats and trucks of less than 2.5 tons will be free from traffic tolls during Tet or Lunar New Year. This voluntary move of the investor is aimed to serve and share with Mekong Delta people returning home for Tet reunions and going back to work after the holiday.

“For more than 12 years Mekong Delta people have hoped and waited for this expressway to help deal with traffic jams on National Highway 1. More than ever, that belief must be answered by action and determination to complete the project as scheduled,” he affirmed.