Every success comes from hard work and every sweet fruit is grown from labor. But her choice and success with the idea of starting an agricultural business is always more admirable because it is not only about the courage to confront difficulty, but also about the desire to seek economic development for many people and bring a safe food source to the public. 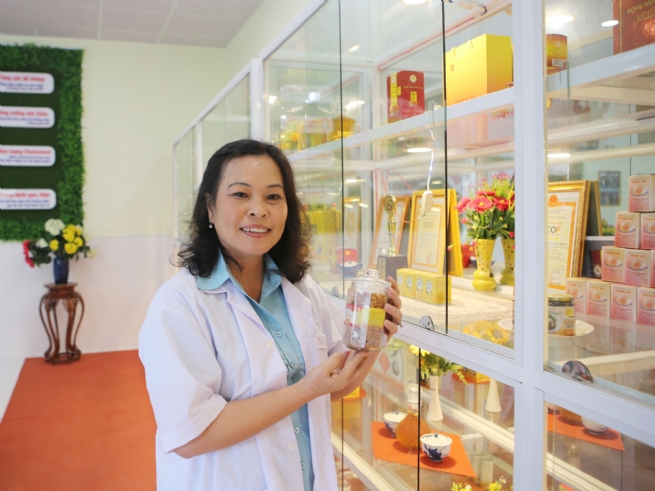 After Ms. Luon graduated from the university in 1997, she got married and developed some businesses with her husband. They were quite successful in producing incense for export. Each month, they exported 150 tons of incense to Thailand, Malaysia and other markets on average. They thus had a stable source of income and created stable jobs for hundreds of people.

But she never gave up the desire to culture cordyceps fungi in her hometown. The effect of this medicinal material has been proven. As cordyceps fungi are very difficult to be found in nature, they are very expensive and hardly affordable to the poor. This motivated her to find ways to create a source of clean and safe food, good for health, for the community.

In 2017, she and her husband started researching information about cordyceps fungi on the internet and learned that some scientists in Vietnam and in other countries had successfully researched and cultured cordyceps fungi in the laboratory. After that, she devoted all her time, effort and resources to experimental studies to find out the culture process.

At first, she tried and failed again and again, but she did not feel discouraged. With the support of seeds and research papers and lecturers working at Hanoi Agricultural Research Institute, and her friend working at a university in Thailand, Luon gradually obtained initial results.

She said, it is very important to adjust and control room factors (like temperature, humidity and light), and input parameters (substrate) to create the finished product (mushroom) with the desired quality (active ingredients are stable, fungi are orange-yellow, soft, fibrous, 5 - 7 cm high). A culture cycle of cultivating and harvesting the mushroom is 60 - 75 days.

After more than two years of hard research, Luon and her husband successfully cultured cordyceps fungi in the laboratory and completed culturing technology. Then, they established Thien An Cordyceps Fungi Co., Ltd and started a large-scale cordyceps fungus farm in Go Cong Tay District. The company invested in 34 mushroom farming rooms (30 square meters each) and four incubation rooms (60 square meters each). Each room can raise 5,000 boxes of fungus embryos and harvest 45 - 50 kg of fungus (priced about VND4 million per kilogram).

Most specially, the company’s products are cheaper than their rivals on the market. Explaining this, she said, Thien An is the only company that has a closed process of the production of cordyceps fungi, helping to enhance the value of this high-grade medicinal mushroom.

The company manages to reduce investment cost (designing investment items by itself), labor cost (using replacement machinery) and use plant-originated culturing organs (replacing silkworm pupae) to significantly lower production costs. Besides, as the fungus is cultured aseptically and monitored strictly (temperature, humidity and light) to make the medium like the nature outside, so substrates and embryos have a high success rate and product quality is high.  On the other hand, Thien An can make use of all parts and by-products of cordyceps fungi, helping to lower product prices.

In 2020, the company’s cordyceps fungus products were granted the 4-star Go Cong Tay OCOP Certificate, became a typical industrial product in the countryside of Tien Giang province and won the first prize in the “Outstanding agricultural products” contest at the Agricultural Products and Food Safety Week. Luon has been awarded a lot of titles and awards from the Provincial People's Committee and the Vietnam Farmers Association. This is the foundation for Thien An Company’s cordyceps fungus products to become one of typical products of Go Cong Tay district and Tien Giang province and a valuable gift for tourists.

Diversifying products so that Thien An’s cordyceps fungi can reach customers and help them improve health to support disease treatment is Thien An’s development direction in the coming time.

Sharing about her upcoming plans, engineer Tran Thi Luon said that she would study and perfect the product for export to the international market.

Although the initial scale was not large, Thien An has always adopted a firm development plan, ensuring high standards, such as: factories meeting HACCP standards of Vietnam, aiming to achieve international ISO; employees periodically trained on food safety and hygiene as well as professional skills. Its products are qualified for strict requirements of One Commune, One Product (OCOP) program and win the trust of major partners such as VinGroup, Aeon, CopMart, etc.

The business performance has enabled Thien An Company to create jobs for many local workers. Most importantly, the company has more favorable conditions to become a respected sponsor for charity and community activities. Helping many poor and sick people use clean and affordable valuable food further highlights community values that entrepreneur Tran Thi Luon brings.